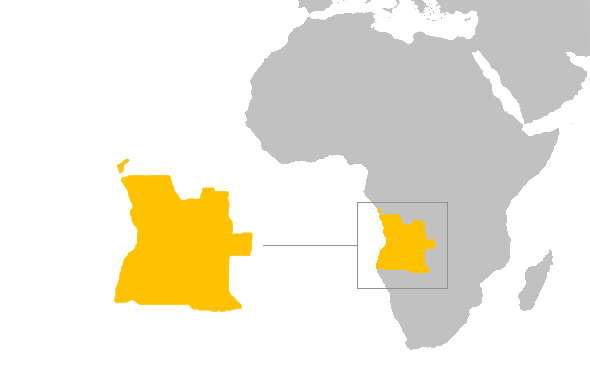 Angola is a former Portuguese colony that has suffered for 40 years with a civil war. Now the country is finally in peace which means that the doors are open for surfers from all over the world to discover the wonders of this african country. Is true that Angola is still developing their tourism industry, but that means empty line ups and untouched point breaks that are waiting to be surfed by you. This could be one of the last authentic surfing and adventure paradises in the world. Angola has 1500 kilometers of very exposed coastline (same latitude as Indonesia) which means that there are lots of swells and plenty of beaches to be explored. If you are not the adventurous type you can stay close to the main surfing area of Cabo Ledo and surf the well known surf spots that will be uncrowded anyway. But if you are looking for a surfari you can jump on a 4x4 and go after the real prize. Long perfect waves with multiple barrel sections for those who are willing to get out of the beaten path. Besides surfing, Angola has a very rich cousine full of seafood dishes, a very strong dancing tradition that will make your trip an exotic experience and friendly people that always have a smile on their faces and are willing to help anyone who is interested in knowing this beautiful country.

Angola has a typical monsoon climate. From September to April you should expect warm weather and lots of rainfall (hot and humid). From May to August the temperature drops and there is almost no rain (cold and dry). The best time to surf in Angola is from June to October. That's when the swells are most consistent and it's almost impossible to have flat days. During the peak of the surf season is when the water temperature drops so we recommend for you to bring a spring suit just in case, but most of the time you will be able to surf on your boardshorts.

To this day, there are only a few known surf spots, which makes Angola a country with a practically virgin coast. Most of the spots are located in between the capital, Luanda, and the area of Cabo Ledo. Here are some of the most famous surf spots in Angola.

Barra Kwanza: Just 80 km south of Luanda. Although the bottom it's a bit rocky it is still good for beginners.

Point Mussulo: located in the city of Luanda, this surf spot is well known and usually there are some locals surfing there. Be aware of strong currents.

Ambriz Beach: beautiful beach close to the Airport of Ambriz. Locals refer to the beach as “paradise on earth”.

Buraco: this is an easy surf spot to find. Located 40 km south of Luanda. There is a beach break with waves suitable for all levels.

Miradouro: just 55 km outside of Luanda you will find this left point break. Access can be a bit tricky so you need a 4x4 in order to get to this spot.

Be sure to bring all your gear from home, as well as extra fins and leashes as there are no surf shops to rental or buy from.

There are two main providers: Unitel and Movicel. Unitel has the best coverage.

SIM cards can be purchased only at official stores and outlets run by the providers. Plans are anywhere from $1.80-10 USD for 400MB-3GB.

In the capital Luanda the private bus company TURA operates and is very reliable.

Taxis are mostly privately-owned and not very common in Angola. Instead, you will find white-blue painted Candongueiro (minibuses) offering their services.

Flash flooding may occur during the rainy season from October to May.

You need a visa to visit Angola as a tourist. Apply for an eVisa online at: http://www.smevisa.gov.ao

You cannot get a tourist visa on arrival without pre-approval. The visa cost $120 USD and is payable in cash at the airport when you arrive.

Note, malaria is endemic in Angola.

Portuguese is the official language and is widely spoken. There are another 42 languages, the most common being Umbundo, Kimbundu and Kicongo. English is not widely spoken.

The currency is Kwanza (Kz)

The high season for waves in Angola starts in June, with the beginning of Cacimbo (dry or winter season) and lasts until mid-October.

Checking Surf forecast
Checking the forecast about a week before your trip is always a good idea. Understanding what the waves will be like and knowing what gear to pack is essential.

You can check the forecast for the waves here.

World Nomads has great travel insurance packages that are not super expensive and they cover adventure sports like surfing.

Check out some pictures from surfing in Angola at #surfangola