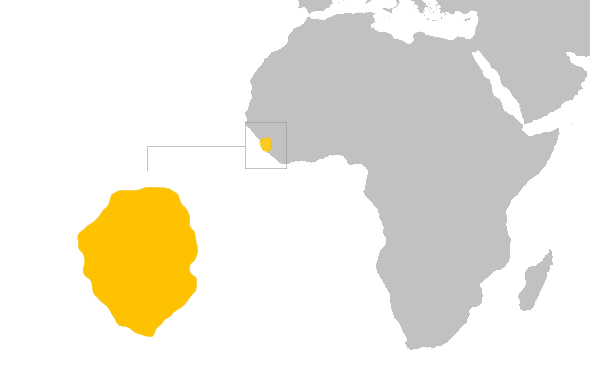 Sierra Leone is a peaceful country in the southwest coast of west Africa. After many years of a horrifying civil war the conflict has come to an end in 2002 and the friendly people from this country are happy to leave this part of their history behind. Sierra Leone has a very exposed coastline that receives plenty of swells all year round. Nearby countries are famous for having world class waves and Sierra Leone is no exception. The bigger swells come in between March and October and the water is warm throughout the whole year. The coastal village of Bureh is located at the tip of the Freetown Peninsula and is the main surfing area in the country. Bureh it’s only 1,5 hours from the capital Freetown and has gorgeous beaches and a beautiful mangrove area where the forest meets the sea. This is where the first surf club in Sierra Leone was founded a few years ago. The main surf spot is a very consistent left-hander that wraps around the Bureh Beach creating nice waves for all levels of surfers. Besides this area the rest of the coastline remains pretty much unmapped leaving lots of potential and possibilities to find virgin waves. Outside of surfing, Sierra Leone is full of natural resources and beauty. The country is also known for having a big amount of diamond mines that inspired the famous Dicaprio movie “Blood Diamond”.  This small country with big hearted people is waiting anxiously for your visit and the opportunity to show you their stunning country.

The climate in Sierra Leone is tropical with two seasons. Dry season goes from November until May and the rainy season is from June to October. The coolest period of the year is in between December and January but temperatures can still be very high averaging around 27.3°C (81°F). The low humidity caused by the Harmattan Wind season during these two months make the heat more bearable. March and April score the hottest temperatures and the elevated humidity makes the heat index higher than the actual temperature. The ocean average temperature is around 30°C so there is no need to bring a wetsuit. We recommend bringing a rash vest and lots of sun cream to protect from the strong UV even on cloudy days.

On the south of Freetown there is a surf spot at River No.2 Beach. This is a beginners friendly spot but can be fun for advanced surfers as well. Sulima is a town in the extreme south east of Sierra Leone. There you will find a good beach break lying at the mouth of the Moa River. Aberdeen is a coastal neighborhood in Freetown. The beach has some good breaks and numerous up-scale restaurants. Bureh Beach is the epicenter of the surf community. Located 5km north of Kent this beach has a great vibe and a good surf spot breaking at the river mouth. This is where the first surf club of the country was founded so expect some crowd in the water.

A simple rice dish starts at $2 USD. Midrange meals in restaurants range from $7-10 USD with beers. Dining & drinking at high-end restaurants can cost anywhere from $35-80 USD.

There are a handful of places that you can rent a board, starting at $10 USD for half the day.

The two biggest providers are Orange and Africell. Generally Orange is seen as the most reliable provider followed by Africell. SIM cards can be purchased at any provider's store

Prepaid packages are around $15 USD.

Taxis are possible expect to pay around $3-5 USD per hour. However, with this option you are unlikely to get a 4 wheel drive vehicle which you will need in order to get to most beaches.

Okadas (motorbikes) are abundant and for those in a hurry, on a budget and adventurous.

Private Buses (Poda Poda) are a decent option if you are just traveling around the city. Expect loud music and look out for amusing quotes on the front and back of poda podas.

4WD rentals start at $120 USD a day. Due to the bad conditions of some of the roads in Sierra Leone it is advisable to hire a 4WD if possible.

Sierra Leone mainly suffers from floods and landslides. Beware of the risk of getting Malaria in this part of Africa.

Citizens of the Economic Community of West African States (ECOWAS) and 15 other African countries are visa free.

Visas on arrival are available for citizens of 71 countries, including the EU, US, and Australia.

English is the official language in Sierra Leone. Krio is the de facto national language.

The bigger swells come in between March and October but the water is warm throughout the whole year.

Dial 999 in case of emergency.