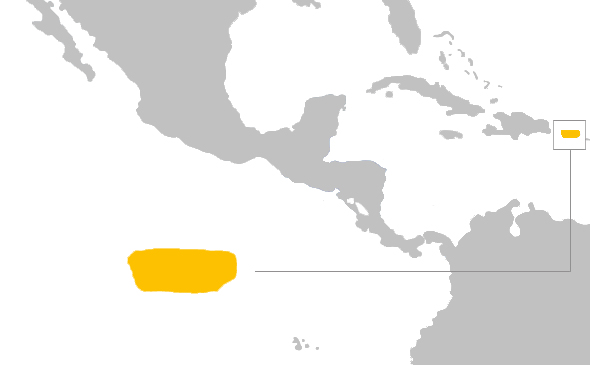 Puerto Rico is an unincorporated US territory and it’s considered one of the best surfing destinations in the Caribbean. The island is situated in the north-eastern Caribbean Sea and is known as the “Caribbean North Shore”. There are many kinds of waves along the 580 km of coastline making Puerto Rico the perfect destination for all levels of surfers. Puerto Rico has more than surf to offer to the travelers who come to visit this laid-back island. The tropical vibes along with the stunning scenery of palm trees and white sand beaches are more than enough reasons to add this amazing destination to  every surfer’s bucket list. The main surf season in Puerto rico is from October to February. This time of the year can be crowded and lots of surfers prefer to come from mid-April to June. There is less crowd during this shoulder season but the summertime rains still haven't started. With all these qualities it’s a big surprise that Puerto Rico is not considered one of the top surfing destinations in the world.

The climate in Puerto Rico is tropical with warm temperatures throughout the whole year. Average air temperatures are around 29 °C (85 °F) in the coast but can get lower on the mountains inland. Easterly trade winds prevail year round while the rainy season happens from April into November. In autumn North Atlantic storms start kicking in around late September and the deepwater Puerto Rican trench captures any north swell  bringing consistent waves to the North Shore of the Atlantic. This is a good time to surf in Puerto Rico.  During winter time surfers from all over the world travel to Puerto Rico. November to February is a transition time that sees a constant string of low-pressure systems off the Eastern Seaboard, which can create some solid swells. This is when the offshore winds are prevailing. Swells aren’t as large as in winter, but can reach up to 4-6ft and occasional 8ft swell, even into May. Summer usually presents a lack of big swells.

Claro is a good choice. SIM cards can be purchased from the airport, at local stand up shops, and retailers everywhere.

There are públicos (bus services) that travel on set routes, but they wait for the vehicle to be full before departing, so make sure you have time on your hands.

Renting a car or motorbike is your best option though. Rental cars start at $40 USD a day.

Uber is also available in the city, as are a few local ride-hailing companies.

June to September is hurricane season.

US and Candian citizens do not require a visa to enter. Citizens from 39 countries, including the UK and Australia, can enter Puerto Rico with a visa waiver for up to 90 days.

Spanish is the dominant language of Puerto Rico, but many of the local people also speak English. Traveling to the island without Spanish speaking skills is not a problem. You’ll get by just fine with only English.

The currency is the US Dollar ($)

September to November and April to May. June to September is the rainy season with the potential for hurricanes.

Dial 911 in cases of emergency.