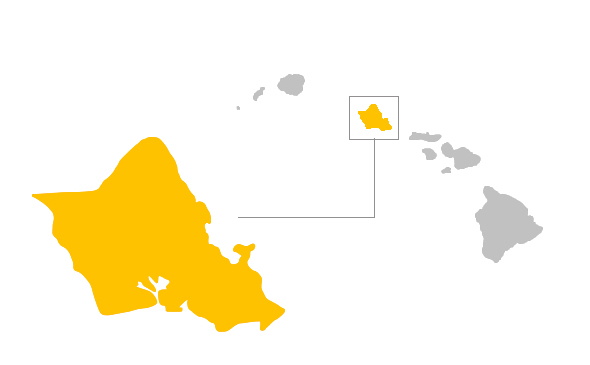 Oahu is one of the islands that comprise the Hawaiian archipelago and it’s considered to be the surfing’s Mecca. The north shore of the island has the most famous waves in the world and receive thousands of surfers every year that travel to Hawaii to watch and surf the best waves in the planet. Oahu is also the birthplace of the most prestigious surfer of all times, Duke Kahanamoku, who introduced surfing as we know to the whole world. Waves like Pipeline, Waimea, Waikiki and Sunset have featured in many surf magazines and videos for decades and they will probably still do since every year, from November to January, most professional surfers visit the island and the international surf community is focused on the north shore of Oahu for the grand final of the world tour at Pipeline. The Hawaiian islands have no continental shelf since they are the tips of underwater volcanic mountains. This allows the North Pacific swells to hit the coast with all the energy, speed and power creating massive strong waves. Combined with perfectly shaped lava reef formations and you have the best waves in the world.

The best and most famous surf spots are Pipeline, Off the Wall, Rocky Point, Sunset Beach, Haleiwa, Waimea and Velzyland.