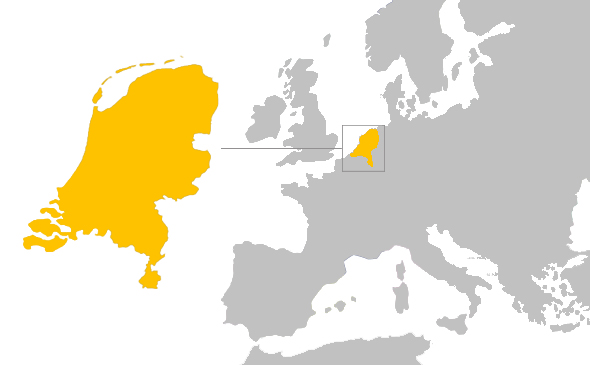 The Kingdom of the Netherlands is a West European nation, bordered by Germany to the east, the North Sea to the west and north and Belgium to the south. Known for its windmills, canals, dikes, rich culture and open-mindedness. The country has great waves, especially when the NW-N swells pick up. Despite the jetties, seawalls and dyke, a good offshore wind will create the perfect conditions for a splendid surfing day. The total land area is 33,893 km2 and a 451-kilometer long coastline. The weather in the region is famous for its unpredictability. The climate is moderate maritime, providing mild winters and cool summers. Rain tends to occur evenly around the year, falling with more intensity in the autumn. April is usually the driest month. The daily average temperature is 10ºC, with temperatures reaching a maximum of 22ºC in the summer and a minimum of 0ºC in the winter. Southwest winds are prevailing, blowing stronger in the coastal regions.

The climate of the Netherlands is influenced by the North Sea and the Atlantic Ocean, so it's cool, cloudy and humid for most of the year. The rains are not so abundant, ranging between 750/850 millimeters (29/33 inches) per year, but they are frequent throughout the year.

The wind is another characteristic of the Dutch climate, and blows frequently, especially in autumn and winter, when there may even be storms.

Being a small and flat country, the Netherlands have a quite uniform climate, although there's a slightly greater continentality in inland areas (but we are talking about 1-2 degrees Celsius less in winter and more in summer) compared with coastal areas, which in turn are more windy. For this reason, it can be said that the various Dutch cities (Amsterdam, Rotterdam, Utrecht, The Hague, Eindhoven, etc...) have essentially the same climate.

The capital of surfing is Scheveningen. Here, you will find multiple beach breaks with quality peaks for everyone. Despite the crowd factor, it's one of the most consistent surf spots in the country. In the south of the Netherlands, waves can be caught near Domburg, in the province of Zeeland. Check for Blokken, Slufter, Schouwen Duiveland, and Vlissingen. The northern beaches are usually flat because of the Waddeneilanden Islands barrier, which halts swell coming from the North Sea. Nevertheless you can check Petten, Camperduin and Hargen, Bergen Aan Zee, Wijk Aan Zee will work north of Amsterdam, and south of Texel.

There are a handful of places where you can rent gear from. Boards start at $17 USD for 2 hours.

Lycamobile is a good choice. SIM cards can be purchased from mobile phone shops, supermarkets and kiosks. Prepaid packages start at $15 USD.

The public transport system is excellent, it’s fully integrated bringing even the smallest of villages within easy reach. Several of the larger cities also have a tram network and definitely buses.

The mostly flat landscape makes cycling a great way to get around. Rentals can be found for $8 USD a day.

Citizens from 62 countries, including the US, and Australia, can enter the Netherlands without a visa for up to 90 days.

The currency is the euro (€)

Thanks to the strong lows that send NNW swell pumping into the coast, spring and autumn are the best seasons for surfing, but it’s also quite cold.