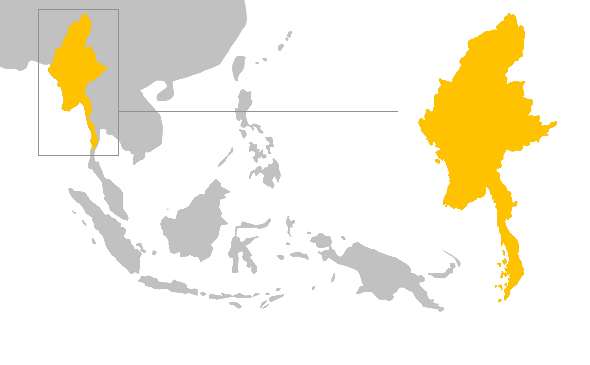 Myanmar (formerly Burma) is a Southeast Asian nation of more than 100 ethnic groups known for having breath-taking landscapes, green lush forests, paradisiac sandy beaches and amazing buddist temples. The recent history of the country is marked by an oppressive military regime that isolated this beautiful country for decades. Myanmar surfing potential is still not completely known but recently the sport has officially arrived in the country and it is the passion of teenagers that live in fishing villages who are part of the country's first surf generation. The country has a huge unexplored coastline with 1,930km and only a few surf spots have been surfed, but word is spreading out about the possibilities of world class waves generated by swells that travel across the Indian Ocean. So far Myanmar is still not a popular surf destination like their southern neighbors but given the opportunity this beautiful country could be a main tourist destination on the bucket list of every surfer on the planet.

The climate in Myanmar is generally tropical, with a southwest monsoon causing a rainy season from mid-May to October, a cool and dry season from November to mid-February, and a hot pre-monsoon season from mid-February to mid-May. The rains in the monsoon season occur more often along the coast in the form of torrential downpours. During the dry season the country experiences lots of sun shining days, while in the wet season there are lots of consecutive rainy days. The sea temperatures remain steady at around 28°C (82°F) all year round.

The nation gets consistent surf swells from both Antarctica and the Indian Ocean from mid May to late September; however, these reliable waves also bring a pretty steady supply of rain, since it happens during monsoon season.

The best time to venture out is either the beginning or end of the season, where you can catch the waves without the rain.

Myanmar surfing potential is still something of a mystery. The country has 1,930km of coastline with mostly unexplored beaches. The west-facing coastline of Mon State has lots of river mouths that must create perfect sandbars but so far nobody has found them yet. The potential is obvious for those who are willing to look for it. Here are a list of well known surf spots in the country: Chaungtha, Gottaung Beach, Gwa, Kanthaya, Ngapali Beach, Ngwe Saung, Peninsula Left and The Rock.

There are one or two places where you can rent gear. Boards start at $10 USD for an hour.

Ooredoo or Telenor are a good choice. SIM cards can be purchased from the airports or many different vendors throughout Myanmar.

Taxis come in a variety of different forms and are inexpensive and plentiful in most towns and cities.

Hiring a car with a driver can be the most convenient way to get between certain destinations. You can hire a driver for around $100 USD a day.

Yagoon has a circular rail service for commuters.

Tourists rarely rent cars, you'd need a special permit and to have a local with you in the car at all times.

Burmese is the official language. You will not find a lot of English speakers.

The currency is Burmese kyat (K)

From May to September.