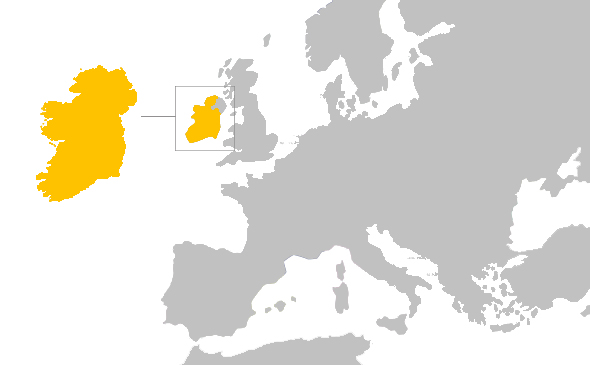 The island of Ireland is one of the best kept secrets in the surfing community. Strategically located in the north atlantic the country is battered with lots of swells throughout the year. The potential of the Irish waves is getting popular among surfers who are not afraid to endure the cold water in order to score some epic surf conditions. No matter what your surfing level is this country has everything to offer from big waves that can get to 20+ ft to mellow rolling beach breaks. The island is gifted with a coastline full of hidden gems so there is always an empty line up waiting for you somewhere. Despite the lack of interest among the international surfing community, the sport is getting popular in the country so it’s not hard to find surf schools offering lessons and renting equipment. Consistent swells, a big variety of waves and low crowds are some of the best things about this country and don’t forget their Guinness reputation. The best time to surf in Ireland is from September to May and despite being the coldest water period this is when the North Atlantic unleashes all its power over the coast of the island. So get yourself a decent wetsuit, some booties, some gloves and a hood before you go. The best place to start exploring the coast is at Donegal Bay. This is a swell magnet area with predominant offshore winds, beautiful countryside backdrops and the most popular surf spots in the country which doesn’t mean crowds at all. So what are you waiting for? You better enjoy this magnificent country before this secret is spread to a wider audience.

The climate in Ireland is temperate maritime but heavily influenced by the North Atlantic currents so there aren't extreme temperature variations. The country has mild winters, cool summers and frequent rainfall. Thanks to the amount of rain it receives the land is very green. This is why the country is known as the Emerald Isle.  If the rain starts to wear you down, have in mind the local saying “It doesn’t rain in the pub”. The west coast is wetter than the east coast. However, the best surf spots are located in the west because this coast is more exposed to swells brought by the North Atlantic Ocean. Best time to surf is during the autumn and winter. This is when the North Atlantic Ocean is more active unleashing a massive amount of swells to the Irish coast. If you come at this time of the year be prepared for the cold water. The average water temperature during this time of the year is 13°C (55°F) which means you will need a 5/4 wetsuit plus gloves, booties and a hood. During summer and early autumn a 3/2 suit should be enough.

There are several world-class waves in Ireland and tow-in surfing is very much appreciated. The best surf spots in the country are located in the more exposed west coast.

In Donegal, there are lots of amazing surf spots. This is the birth of Irish surfing culture. Rossnowlagh beach is one of the best beaches to learn how to surf. Bundonran is probably the place with the most agglomeration of world class waves in the country so take some time to explore this village. There are many options of reef and beach breaks to choose from.

In the North coast check out Enniscrone, Castlerock Strand and Portrush. These surf spots deliver good right handers. On the South coast you should look for Crab Island and the famous Doolin Point. Lahinch is a good option for those who enjoy a fun beach break. Ballybunion‘s South Beach in County Kerry is one of the most underrated beaches in Ireland. Surrounded by rugged cliffs this beach has been a hot spot for surfers for over twenty years.

Mullaghmore Head, near Tullaghan, is the most important big wave riding area in Ireland. Here, you can catch the wave of your life if you dare to defy the 15-metre walls of water or just watch while some crazy surfers do it.

It is as threatening as The Slab. Located near Portrush, this heavy wave is only recommended for very experienced surfers.

A cheap meal at a cafe or pub will cost around $9-16 USD. Midrange meals in restaurants range from $17-32 USD. Dining & drinking at high-end restaurants can cost anywhere from around $75-120 USD.

Vodafone is a good choice. Their prepaid package costs around $32 USD for 5GB.

You can purchase prepaid SIM cards from official stores, approved resellers, most supermarkets and corner stores.

Ireland has efficient train services between large cities. The bus network however,  is much more extensive than the rail and buses are usually cheaper than trains.

If you’re in major cities you’ll find plenty of buses or taxis to help you get around.

You can find car rentals starting at $20 USD a day.

If you are an EU, Irish citizen or British citizen you can freely enter. Citizens from 56 countries, including the US, Australia and Canada are visa exempt, allowing you to stay for up to 3 months.

Although it's not mandatory, it’s recommended that you have been vaccinated for hepatitis A & B, rabies, meningitis, polio, Tdap, chickenpox, shingles, pneumonia, influenza, measles, mumps and rubella.

Both English and  Irish are official languages. English remains the primary language. While Irish (Gaelic or Gaeilge) is spoken mainly in areas located along the western coast.

The Currency is the Euro

The best time to surf Ireland is September to May, when the Atlantic Ocean provides plenty of powerful cold water swells.

Check out surf pictures of Ireland at #surfireland.