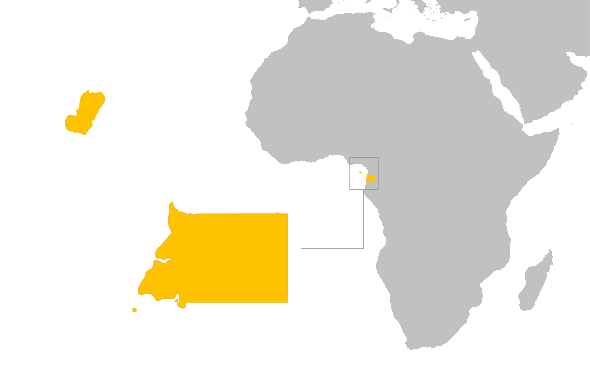 Equatorial Guinea is located on the Central African Coast and is formed by the Rio Muni mainland area and 5 volcanic offshore islands. The country is known for having a long lasting dictatorship supported by a prosperous oil industry. Despite the fact that the government makes huge profit with the national oil reserves, most of the population is still kept in deep poverty. Besides that the Equatorial Guinea has interesting spanish colonial architecture in the capital Malabo and beautiful natural parks that are home to gorillaz, chimpanzees and elephants. There are not many registered surf spots in Equatorial Guinea. Having said that, there should be a lot of waves scattered along the unexplored coastline so if you just take a look on a map and use your experience and imagination you should be able to find some virgin gems. The most well known surf spots in the country are located at Bioko Island that has good exposure to the roaring forties and also NW swells. Ranked by the United Nations among the 10 least-visited countries in the world, Equatorial Guinea hasn’t seen many travelers and if you don’t have experience traveling around Africa we don’t really recommend going to this country.

The climate in Equatorial Guinea on both the continental region and the islands is equatorial, with warm temperatures and high humidity all year round. The cooler months are from June to September when southwest currents prevails and the hottest are from January to May. There is plenty of rainfall along the course of the year, but the rain pattern in the mainland is the opposite to the offshore islands. Equatorial Guinea has good exposure to roaring forties swell, particularly in the Southern Hemisphere winter months. The best time to surf in the country is from April to October and the most consistent months are from June to September.

There are not many well known surf spots in Equatorial Guinea. The only registered surf spots in the country are located at Bioko Island. Here they are: Caracas, Nacho, Playa de Alena, Playa de Carboneras

Getesa is a good choice. SIM cards can be purchased only in an official office of Getesa.

Minibuses are a common form of public transportation. Which is a type of shared taxi connecting Malabo with other major towns

Bush taxis are the main form of transportation in Equatorial Guinea.

There are no passenger train services.

Driving a car, while possible, is not recommended, as you might come across military and police roadblocks where you will be questioned.

Citizens from the US, Barbados and China are visa exempt and can stay for up to 90 days. Citizens of other countries require a visa for all purposes including transit.

The official languages are Spanish, French and Portuguese. However, you will not find many French or Portuguese speakers, nor English.

The currency is the Central African Franc (CFA).

The best time to surf in the country is from April to October and the most consistent months are from June to September.