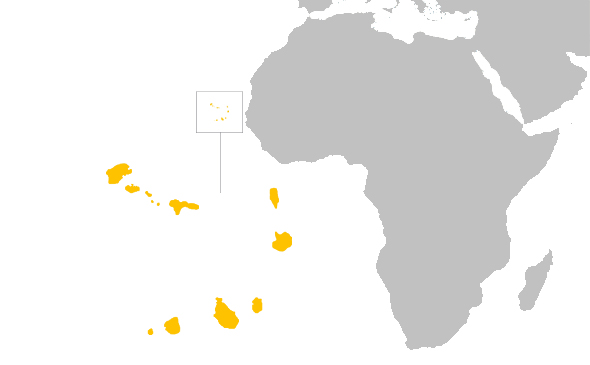 Cape Verde is an island country formed by 10 volcanic islands, 570 kilometres off the coast of West Africa. This archipelago is famous for being one of the most consistent “wind destinations” in the world, being ideal for kitesurfers and windsurfers. But Cape Verde also has some great surf spots that attract many surfers as well. Because of the constant wind there is always one side of the island where the offshore is blowing. Winds combined with the nicely shaped volcanic reefs can produce some of the best waves you will find in the Atlantic Ocean.

Cape Verde is one of the safest countries in Africa and enjoys tropical weather with warm temperatures all year round, which means that it is ideal for pleasant surf and beach holidays.

Cape Verde has a subtropical climate that makes year-round travel very enjoyable. The islands experience a windy season from October to July and a rainy season that lasts from August to September. That happens because the cold Atlantic currents produce an arid atmosphere around the archipelago.

Most of the well known surf spots of Cape Verde are located in the island of Sal. However there are plenty of other surf spots scattered around the other island of the archipelago. Here are the most famous surf spots in Cape Verde:

Ponta Preta: this is the most popular wave of Cape Verde. It's located in Sal Island, west of Santa Maria city. This wave is better suited for experienced surfers and works better with NW swells and low tide.

Monte Leão: located on the west coast of Sal Island, close to the Island's airport. This is a long right-hander that works better with N and NW swells.

Ponta do Sino: this is one of the most consistent surf spots in Sal Island. The wave breaks on top of a reef bottom covered by sand and is suitable for all kinds of surfers.

Santa Maria: this surf spot is located in a very long sandy beach on the southern tip of Sal Island. The beach is very exposed to the wind making it popular among kitesurfers. Works better with SW and NE swell during the summer or the big NW swells that come during the winter.

Fragata: this spot is just a few minutes away from Santa Maria, on the south east coast of the Sal Island. Works best with E or NE wind.

Alibaba: up north from Ponta Preta you will find a more exposed surf spot. The waves break on top of a lava reef bottom and work best with NE wind and ny W swell.

Palmeira: when this wave is working it’s probably one of the best waves in Cape Verde and probably in all of Africa. Better suited for experienced surfers because it breaks on top of a shallow lava reef. It works with all tides and it can handle up to 12 ft. Located half an hour away from Santa Maria it’s usually uncrowded and totally worth the drive.

You can find a handful of board rental shops near the major surf spots. Costs range from $17 USD for half day to  $27 USD for full day.

CV Móvel offers the best coverage SIM card in Cabo Verde. Cards can be purchased at all CVTelecom shops and plans are anywhere from $4.50-5 USD for 200MB-2.5Gb.

Yasis (minivans) are open trucks with rear seating that serve as local buses. They are commonly overloaded, and rarely keep to timetables.

Taxis are a good option and are easy to find. Short rides are around $3 USD.

For inter-island flights around Cabo Verde there is Binter Canarias.

Renting a car is pricey, setting you back $50 USD a day. If you’re going to get one, consider a 4WD, especially on Boa Vista, as road conditions are rough.

Cape Verde is a windsurfer’s paradise, so expect to find a lot of, well... wind!

There can be prolonged droughts, volcanic activity, as well as earthquakes.

There are many visa-exempt countries, which are mostly in Africa, Europe and the Americas. If you need to get a visa, you may obtain one  in advance from a Cape Verde embassy/consulate or upon arrival at the international airports.

The official language in Cape Verde is Portuguese. However, Creole (or Kriole) is widely spoken on the islands. On the bigger islands like Sal and Santiago you’ll find a lot of locals that can speak English.

Find the best waves in Cape Verde between November and February.

Dial 112 for all types of emergencies (medical, police, fire).