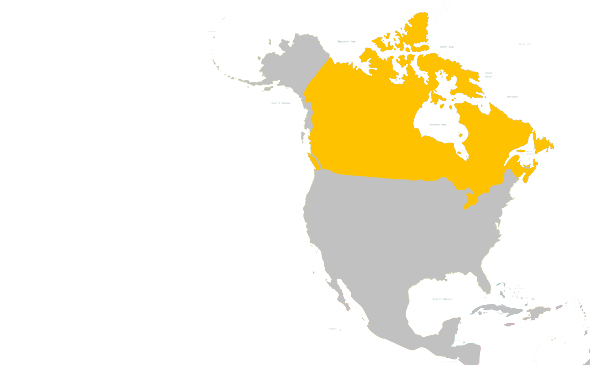 Canada is located in North America and is the second largest country in the world. The country also has the longest coastline in the world with 202,080km of shoreline leaving plenty of space for some amazing surf breaks. Despite the cold weather Canada is a great place to surf. The cold rivers,lakes and oceans may not be the first place you think about when someone mentions surfing but the country has all kinds of surf breaks including some world-class waves that will blow any surfers' mind. Tofino is located on the west coast of Vancouver Island and it’s considered the surf capital of the country. The city is part of the

Clayoquot UNESCO Biosphere Reserve and have 35km of beach breaks that provide waves for all levels of surfers. Although temperatures can be really cold, the best time to surf in Canada is during the winter. This is when the waves are bigger and more consistent, but Canada also has good swell consistency throughout the rest of the year. Surfing in Canada started around late 40s when canadian surf pioneer Jim Sadler caught the first waves. Since then the surfing community in Canada has been thriving and becoming more popular year after year. The country even has some inland river waves and impressive tidal bores that are starting to be surfed more often recently. If you are not afraid of the cold and it’s ready to put on a wetsuit, get your boards ready and head to Canada and we promise you won’t regret it.

The climate in Canada can vary due to the large size of the country. The country is usually  associated with extremely cold weather, but most of the country enjoys four distinct seasons. During summer temperatures can rise up to 35°C, while winters constantly register -25°C or lower temperatures. Spring and autumn usually have more moderate temperatures. The most pleasant areas in the country are located down south and the south western province of British Columbia is the only area in the country that registers above 0°C temperatures during winter. Ocean currents can affect the climate. The warm waters of the Gulf Stream moderate the temperatures on the east coast, while the Alaska Current in the Pacific keeps the sea temperature above 4°C. The best time to surf in the country is during the winter from December to February, but both coasts receive plenty of swell throughout the whole year. No matter what time of the year the water is always cold so make sure to pack a proper  wetsuit, as well as gloves, boots, and hoods.

Canada has waves scattered all over the huge 202,080km coastline. The best and most famous surf spots are located on the west coast of the country in the British Columbia province. Here are the list of best surf spots in the country: Long Beach in Tofino, Cox Bay Beach and Chesterman Beach in British Columbia, The Mountain Wave in Alberta, Sandbanks, Great Lakes, Kincardine Station Beach in the Great Lakes/Ontario, Sturgeon Falls in Manitoba, Ottawa River, Habitat 67 in Montreal/Quebec, Summerville and White Point Beach in Nova Scotia.

There are plenty of places where you can rent gear. Boards start at $15 USD, wetsuit rentals are also $20 USD.

Buses or trains are a good option for long distance travel.

Uber operates in all the major cities and towns.

Citizens from 54 countries, including EU, US, and Australia, can enter Canada without a visa for up to 6 months.

English and French are the official languages.

The currency is the Canadian Dollar ($).

The best time to surf in the west coast of Canada is from September to November. During winter time is when the biggest swells show up but the weather can be very cold and challenging.