Surfing in US Virgin Islands 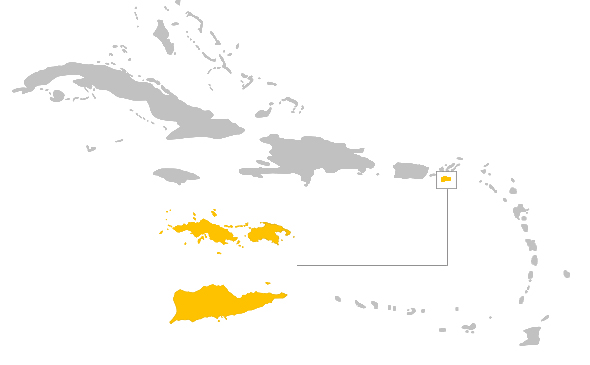 The United States Virgin Islands are located in the Caribbean Sea and are part of the Leeward Islands of the Lesser Antilles. They are an unincorporated territory of the United States that consists of the main islands of Saint Croix, Saint John, and Saint Thomas, and many other smaller islands. This exotic group of islands is known for having a dreamy landscape and abundant marine life earning the nickname of “America’s Paradise”. The weather is pleasant throughout the whole year with beach perfect temperatures and sunny skies on most days of the year. There are many surf spots scattered around the coastline of the US Virgin Islands. When the wind and the swell direction align you can definitely find world class waves that will blow your mind. The best time to surf in the USVI is during the winter months from November to February but some years the surf season extends into May. This is when strong north swells are produced by powerful winter storms in the North Atlantic. During summer the swells are less consistent but the archipelago still receives waves generated by wind swells or hurricanes. The truth is that the US Virgin Islands don’t really have an “off season” and it's a tropical paradise that is just waiting for you to be explored.

Climate in US Virgin Islands

The climate of the US Virgin Islands is considered tropical with hot temperatures throughout the year. As most tropical islands the weather is also influenced by the trade winds that prevail during the more dry and pleasant season that goes from December to March. During this period the average air temperature is around 25 °C (77 °F). From May to October the climate is hotter and the weather is more rainy with average temperature around 28 °C (82 °F). The best and most consistent time to surf in the USVI is in between November and February.

Most of the surf spots in the USVI are reef breaks. Although it’s still possible to learn, surfing in the USVI is better suited for intermediate and advanced surfers. During the winter the North Coast gets most of the swells and during summer the attention shifts to the SE facing spots. These are the best and most popular surf spots in the US Virgin Islands: Cinnamon, Reef Bay, Johns Folly, Johnston’s Reef, Fish Bay, Nanny Point, Water Island, Grassy Point and Hull Bay.

There is one place where you can rent gear. Surfboards start at $50 USD a day.

AT&T is a good choice. SIM cards can be purchased from retailers and kiosks.

The bus runs along the length of St Thomas, St John and St Croix. They run daily between 5:30am and 7:30pm (approximately one bus per hour).

All the islands have taxis that are easily accessible in the main tourist areas. Most vehicles are vans that carry up to 12 passengers. Taxis service multiple destinations and may stop to pick up passengers along the way, so rates are usually charged on a per-person basis.

Rental cars start at around $70 USD.

Citizens from 39 countries, including Australia and the UK, can enter the US Virgin Islands on a visa waiver, but they must obtain electronic authorization (ESTA) beforehand. There are a handful of countries that are visa exempt, like Canada. All other visitors require a visa to enter.

The official language is English.

The currency is US dollar (US$)

Between November and February.

Check surf pictures of the US Virgin Islands at #surfusvi.