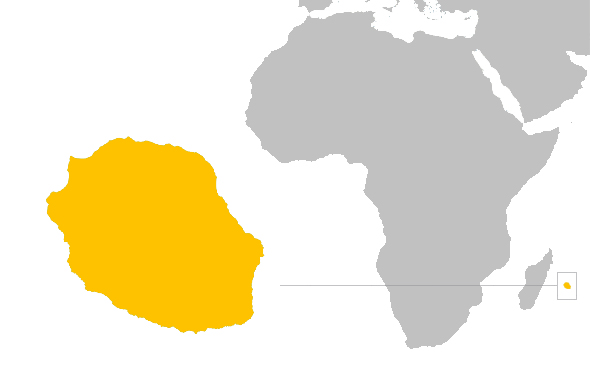 Réunion Island is a French island in the Indian Ocean known for its active volcanoes, green lush rainforests, coral reefs and amazing surf breaks. With warm water and turquoise line ups, stunning backdrops and a world class wave, Saint Leu could be described as a surf heaven. The French Island is in a perfect position to receive strong and consistent swells that circulate around South Africa. When these swells hit the coral formations on the reef barriers they produce quality waves that attract surfers from all over the world. Famous surfers like Rob Machado and Mark Occhiluppo already declared their love for this island and after Rip Curl made one of The Search surf contest at Saint Leu the island got popular in the surf community. Since then surfers from all over the world constantly visited the island but in 2013 surfing was banned from most of the beaches because of the many shark attacks that happened with surfers, bodyboardes and swimmers. This caused a big impact on the local economy that survived on surf tourism because of that the government installed safety nets in many beaches and now surfing is safe again.

Reunion Island has a tropical climate with warm temperatures over the entire year. The geography of the island creates some microclimates so temperatures tend to be lower towards the middle of the island and in elevated volcanic areas. Like most tropical climates the island has two main seasons. Wet season goes from November to April and the dry season happens in between May and October. The average temperature in the island is 24 degrees celsius in August and 30 degrees in February. Most of the rainfall happens in the months of January and February. THe surfing season begins in April and ends in September. Usually the best and most consistent months are June, July and August.

Most of the surf spots in Reunion Island are reef breaks. But there are still some nice beach breaks where beginners surfers can have some fun. The best surf spots are found in between Le Port and Saint-Pierre at the west coast of the island. The most famous surf spot in the Reunion is definitely Saint-Leu, a powerful left-hander that breaks for 200-250 meter. Better to surf on high tide to avoid the shallow coral heads that emerge on low tide. Near Saint-Paul you will find other spots like Cap Requin,Trois-Bassins, Aigrettes, Boucan, Roches-Noire and La Digue. In the Saint-Leu surroundings look for La Pointe-Au-Sel, Etang-Sale and La Caffeine.

SFR Reunion (aka SRR) and Orange are the biggest SIM card providers. Plans range from $7-25 USD for 200MB-2GB. SIM cards are not sold at the airport, you can purchase in the shops and outlets of the providers.

Public transportation is available around the island and in cities. Reunion is best viewed with a vehicle and you will need your own transportation to reach many of the island’s remote sights.

Car rentals are around $30 USD a day.

The real downside is sharks, avoid catching waves in murky waters, just before dark, or after heavy rains. In an effort to improve the safety of swimmers and surfers, shark nets were installed off Les Roches Noires beach in St-Gilles-les-Bains and Boucan Canot beach.

The cyclone (hurricane) season happens during the moist and warm period, between November and April. There can also be flooding and volcanic activity.

You do NOT need a tourist visa to travel to this country.

Reunion is part of France and everyone speaks French. English is about as common as the rest of France—fairly rare.

The Euro is the currency.

The surfing season starts in April and ends in September, whereas June, July and August are the most consistent months of the year.

Dial 17 for the police and 15 for an ambulance.

Check surf pictures of the Reunion Island at #surfreunion.