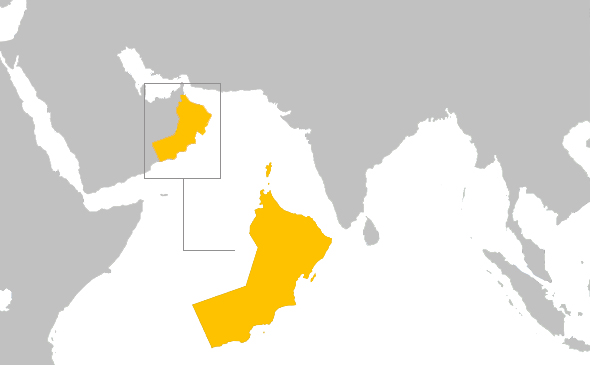 Oman is a country on the southeastern coast of the Arabian Peninsula in Western Asia. The country is known for its deserts and beaches that attract a large number of tourists every year. What many don’t know is the potential that this arabian country has to be a significant surf destination. Oman has been surfed mostly by the expats that live in Dubai but recently was added in the map or the international surf community after a surf magazine exposed quality waves in the “Empty Quarter”. Located in a strategic position at the mouth of the Persian Gulf, Oman has good exposure to the Roaring 40s that head across the Indian Ocean. The monsoon season that goes from June to September also brings constant SW swells that reach the dry and extensive coastline of the country. The best thing about surfing in Oman is the zero crowd factor and the possibility of finding new virgins breaks with name rights, something pretty rare nowadays.

The climate in Oman is mostly tropical desert with low annual rainfall, high temperatures all year round and a big variation between maximum and minimum temperatures. Summer is from June to September and register very low rainfall. During the day the heat is intense and temperatures can rise up to 40°C or more. Be careful with the strong summer winds that can cause heavy sandstorms. Winter is cooler with occasional rainfall. Spring and autumn are warm with almost no rain but pleasant temperatures. The best time to surf in Oman is from June to January. The prevailing winds from June to August are from SW and from November to January the NE trade wind kicks in.

Oman has a long desert shoreline with beach breaks and reefs. Most of the coast is still a big question mark and there are definitely many surf spots still waiting to be found. Here are the well-known surf spots registered so far: Sharqiya, Joe’s Point in Asilah Town, Al Ashkharah, Masirah Island, Ras Al Hadd, Salalah, Bandar Al Saqlah and Jazirah Beach.

There are one or two places where you can rent gear. Boards start at $30 USD for 1 hour.

Ooredoo is a good choice. SIM cards can be purchased from the 24-hour booth in the arrivals hall at Muscat’s international airport.

Within larger towns, the easiest way of getting around is by taxi. All taxis are unmetered, so agree on the fare before driving. Locals would expect to pay up to $5 USD for short trips and up to $13 USD for longer trips. But being a tourist you’ll have to bargain (politely) but hard for those fares.

Alternatively you could hire a driver.

Citizens from 71 countries, including EU, US, and Australia, will need to apply for an eVisa online before travel.

The currency is the Omani Rial (OMR)