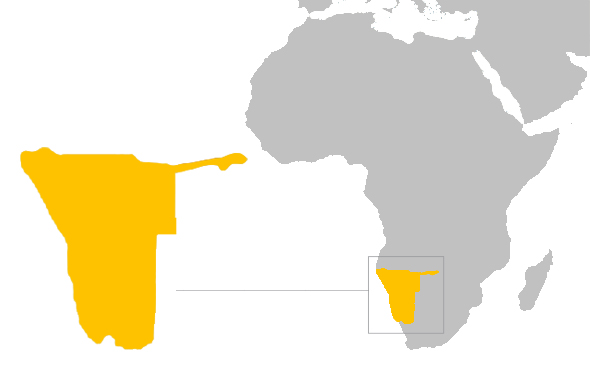 Namibia is located in the southwest of Africa and is known for having desert scenery, 1570km of exposed coastline to the Atlantic Ocean and one of the longest left-handers in the world, Skeleton Bay. After some impressive videos of this wave spread on the internet Namibia immediately fell on the radar of the surf community and became the number one destination of many swell chasers all over the world. But Namibia also has many other surf spots and still has a lot of umapped coastline to be explored. The Namib Desert spans throughout the entire coast and in some parts can be hundreds of kilometers wide making it hard to explore the coastline but there are definitely still some gems out there waiting to be found. Stable swells hit the shores of the country making Namibia one of the best surf destinations in Africa. The country is one of the youngest nations in the continent but enjoys a solid political situation making it safe to travel around. The population is friendly and the locals are willing to share the waves as long as the visitors show respect and follow the surf etiquette inside the water. The best time to come to surf is from March to October with the most consistent months being April and May. The water temperatures are not too extreme but a full 3/2 wetsuit is still required to enjoy the surf in Namibia. The mystic wave of Skeleton Bay was formed by a shift in the angle of the winds that pushed sand into the sea creating this impossibly perfect sandbar. Some people say that this wind pattern is about to shift again and this natural wonder can disappear so you better get yourself there quickly in order to experience one of the most impressive waves the surf community ever witnessed.

Namibia has a dry climate and receives the least rainfall of any sub-Saharan country. During summer time temperatures are high averaging around 30°C (86°F) but on the coast a strong sea breeze keeps the heat index bearable. Due to the desertic landscape the temperatures drop drastically during the evenings and can even get around 0°C (32°F). The temperature differences and the Benguela current of the Atlantic Ocean causes constant morning fog registered in 340 days a year. The water temperatures range from 14-20°C so a 3/2 wetsuit is required from December to April and a 4/3 and booties during the winter. Maybe during the early season you can get by with a spring suit. The warmest month in Namibia is March and the coolest are June and July.

In the coastal town of Swakopmund you will find a few surf spots. Near Strand St. there is a nice reef break called Wreck that works better on high tide. Gun’s was the most famous surf spot of Namibia before Skeleton Bay was discovered. This break is close to the coastal town of Swakomund and works better with light winds from NE. Also close to Swakomund you will find a heavy challenging wave called Thicklip. Cape Cross is 130km up north from Swakopmund and there are usually some good waves there. The headland is home to one of the biggest seal colonies in the world and local authorities close access during some times of the year. Just 20km up the coast from Cape Cross there is a spot called Bocock’s Bay and this area also has some quality breaks. Avoid these places from October to April since this is the shark's mating season and the seal colonies can attract lots of them to the area.

Affenrucken has three world class point breaks. They are located up north from the city there is Bakers Bay, Delaray Point and Chameis Bay. Beware that these spots are close to a diamond mining industry so avoid getting too close to their facilities. At the skeleton coast you will find the crown jewel of the Namibian coast. The wave of Skeleton Bay is a rare beauty that only breaks around 10-15 times per year. When the conditions align this can be the best left-hander in the world with multiple barrel sections at the same wave. Getting 3-4 barrels on the same ride is considered normal if you have enough barreling skills.

A simple meal starts at $5 USD. Midrange meals in restaurants range from $11-20 USD with beers. Dining & drinking at high-end restaurants can cost anywhere from $40-80 USD.

There are one or two places you can rent gear. A board and wetsuit will be around $20 USD for the day.

MTC is recommended as it has the best coverage. They have a store in the small arrivals hall at Windhoek airport where you can purchase a prepaid SIM or you can also pick one up at MTC “Mobile Home” stores. A prepaid package will start at $3 USD.

The easiest way to get around is with a rental car. Car rentals for a 4WD start at $30 USD a day.

Organized transport is rather scarce outside the main population centers

If choosing between public services, luxury buses are the most reliable, running daily services from city to city.

Also beware of the risk of getting Malaria also in this part of Africa.

Citizens from 55 countries, including Australia, US and many European countries, can visit Namibia visa free for 3 months. Your passport must be valid for at least 6 months from the date of entry.

English is the official language. Afrikaans and German are also spoken.

The Namibian Dollar is the official currency, but the South African Rand can also be used freely in Namibia.

The perfect time of the year to visit Namibia is the European summer. Winter swells in Namibia unleash very good waves with the advantage of being almost completely empty in the line ups.