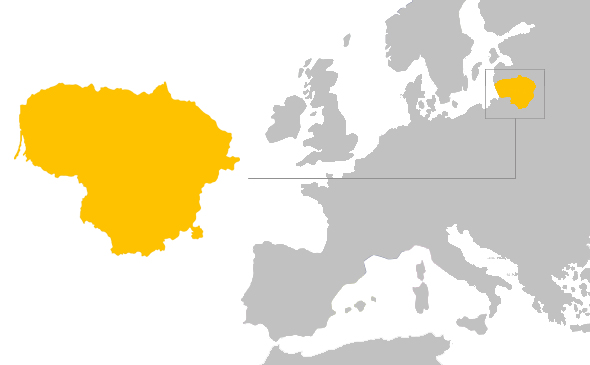 Lithuania is a country located in Northern Europe and bathed by the Baltic Sea . Together with the neighboring countries, Lithuania is putting the Baltic surfing on the map. The surf conditions are usually harsh and waves are often crappy. Lithuanian coastline is actually very windy and better suited for kitesurfing or windsurfing. The main factor for the inconsistency of waves in Lithuania is the unstrategic position that only allows the shores to receive relatively weak windswells. Surfing in Lithuania will never be mainstream and the only reason to surf in the country is for the novelty of catching some waves in the Baltic Sea.

The climate in Lithuania is continental with warm, dry summers and very cold winters. January is the coldest month and temperatures during winter can be quite cold and far below zero. The weather is often windy and humid due to the proximity of the Baltic Sea. In summer the weather can be warm with average temperatures around 20-25°C and sometimes higher, reaching 30°C or more. During this time of the year the weather is mostly dry and sunny. Rainfall often happens during autumn in the form of heavy thunderstorms that can occur in the afternoon. The best time to surf in Lithuania is also the coldest during autumn and winter. During summer the baltic sea is usually calm and it’s rare to have any decent sized waves that can be ridden. If you are surfing in Lithuania make sure you have a good wetsuit, boots, gloves and a hoodie.

The best spots in Lithuania are Melnrage, Nida and Preila.

Tele2 is a good choice.

SIM cards can be purchased from convenience stores, official retailers.

In Vilnius and Kaunas public transport is frequent and efficient: buses, trolleybuses and route taxis cover most of the city.  In the smaller cities (Klaipėda, Šiauliai, Panevėžys), only buses are available.

The national bus network is extensive, linking all major cities to each other and smaller towns.

The Curonian Spit is best explored by bicycle, which are easy to rent.

Citizens from 62 countries, including the US, and Australia, can enter Lithuania without a visa for up to 90 days.

Lithuania is the official language.

The best time to surf in Lithuania is also the coldest during autumn and winter.