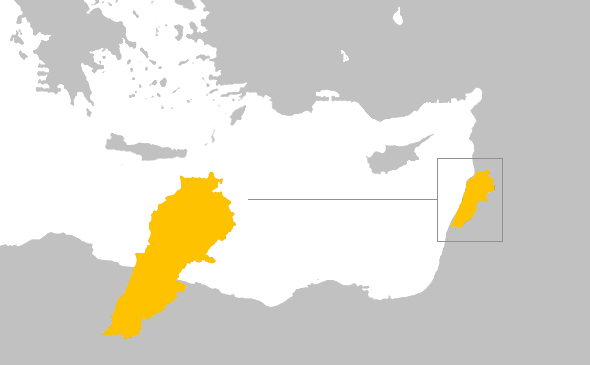 Lebanon is a country located on Western Asia that has a long and rich history. There are beautiful ancient mosques, synagogues and churches and many amazing Egyptian, Greek, Persian, Roman and Arab ruins scattered around the country with easy access to the visitors. Even though Lebanon is not famous as a surf destination the country has an enthusiastic surfing community. Wave riding started in Beirut in the early 60s but was held back by years of civil war and political instability. Over the past two years the surf scene in Lebanon has grown a lot, turning deserted beaches into vibrant places where many locals now are enjoying and learning how to surf. Tucked into the far end of the Mediterranean’s warm waters,

Lebanon has good swell exposure that is similar to their more developed southern neighbor, but way less crowded. The best surfing area in the country is in Beirut but there are waves scattered around the 225km coastline of Lebanon. If you give a chance to surf in Lebanon you will be rewarded with a unique surf experience that includes a healthy dose of Middle Eastern history and culture.

The climate in Lebanon is Mediterranen with long, hot, dry summers and short, mild, wet winters. January is the coldest month with average temperatures around 8°C, while August is the hottest month with average temperatures around 28°C. During summer there are hot and dry southerly winds that can cause strong sandstorms. The most rainy months are from November to March, while June to August is usually rainless. Rainfall is usually in the form of violent storms, causing erosion and local flooding, especially during the winter months. During the summer, the temperature of the water can be up to 29°C, while the water in winter is colder and can go down to 14°C. There are waves throughout the whole year, but the best time to surf is during the winter time from November to April. This is when the surf is more consistent and bigger and swells can reach up to 8ft. During the summer the waves are smaller and less consistent and average around 2-3ft.

The best surf area in Lebanon is located around Beirut and the best surf spots in the country are Jiyeh, Batroun, Tyre, Byblos and Chekka.

Touch is a good choice. SIM cards can be purchased from official retailers.

In and around Beirut and the coastal strip, the bus, minibus and taxi network is extensive, cheap and fairly reliable.

Taxis operate throughout Beirut and Lebanon. Taxis are the most common form of transportation by locals. There are two different types, service (pronounced ser-veese), which means you’ll be sharing the ride with others, the fare will be lower, for short trips only. The other type is normal taxi, which means you will not share and the price will be a bit higher. Taxis are not metered so you’ll need to negotiate the fare beforehand.

Hiring a driver is more common than renting a car. Rental cars start at $40 USD.

Citizens from 81 countries, including the EU, US, and Australia, can enter Lebanon on a visa on arrival. Which allows for a stay up to 30 days. Note, if you have an Israeli stamp, visa, or seal in your passport you will be denied entry.

Arabic and English are the official languages.

There are waves throughout the whole year, but the best time to surf is during the winter time from November to April.