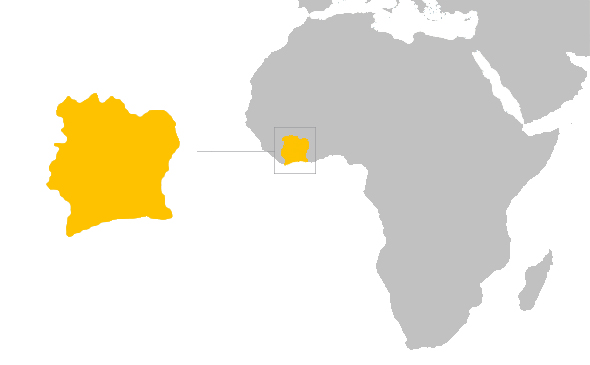 Located on the West of Africa more precisely on the Gulf of Guinea, the Ivory Coast has an open coast to the South which means that it picks up lots of swell coming from the South Atlantic Ocean. With a big variety of beach and reef breaks and amazing backdrops composed of tall coconut trees this African country is still not fully explored or known by the international surfing community as a great surf destination. The last two decades of civil war, military coups and rigged elections have not helped and have held back tourism in the country. Since 2012 the situation seems to be getting better and the Ivory Coast is experiencing a moment of renaissance. Although tourism is taking a while to recover, the country has become the largest economy in West Africa, mainly due to the cocoa production. Recently the country is receiving more and more adventurous surfers that, regardless of the political situation, still want to explore the uncrowded world class waves that the Ivory Coast has to offer.

Ivory Coast is a tropical destination with three seasons. From November to March it’s usually warm and dry. From March to May temperatures rise but there is still not much rainfall. From June to October it’s the rainy season caused by the SW monsoons and during this time of the year the humidity can get really high (90-100%). The highest temperatures occur from March to June and are an average of  36°C or 97°F. The coolest months are August and September. The average temperature of the ocean is 25°C or 77°F so there is no need for a wetsuit at any time of the year. We recommend you to bring a rash vest and lots of sun cream for sun protection even on overcast days.

Assinie-Mafia is a coastal town considered to be the epicenter of the surfing community of Ivory Coast. This is where you will find the best and most popular surf spots in the country. The area is known for the fast and hollow beach breaks that work better with small and clean swells. The best time of the year to surf the beach breaks is from November to April. There are also reef and point breaks in the area, as well as long peeling waves ideal for longboarders and beginners.

These breaks work better with powerful groundswells that hit the coast during the south hemisphere winter. Most of the year the winds are fairly light. From December to May the Harmattan wind prevails and blows offshore during most of the morning. Around lunch time an onshore pick up messes up the surf conditions a little bit. The tidal range is very narrow and only matters for very shallow surf spots. On the west side of the coast there is a village called Monogaga. There you will find a long left-hander that only works with solid 6ft+ swells.

In the center of the Ivorian coast just west of Abidjan there is a town called Grand-Lahou. This beach is famous for separating the lagoon from the gulf of Guinea. The surf spot works better with the incoming tide and it usually has good waves in between April and September.

210k west of Abidjan you’ll find a fisherman village called Drewin near the town of Sassandra. This beach has a long point break to the right that during the right circumstances can produce a world class wave. Also close to Sassandra there is a surf spot called Dabego. This beach has a right-hander breaking from a point that needs a proper swell in order to be a long ride. Works better from April to September.

A plate of poisson braisé (grilled fish) starts at $3 USD. Midrange meals in restaurants are from $6-10 USD. Dining & drinking at high-end restaurants can cost anywhere from $22-35 USD.

There are a couple places where you can rent gear. Boards start at $3 USD for half day.

There are three main companies sharing the market: Orange, Moov and MTN. Prepaid packages are anywhere from $4-10 USD. SIM cards are available in stores and authorized resellers.Public transport

There are plenty of shared-taxis and regular taxis. Shared-taxis run like buses around a town or city. There are several companies running big, air-con buses for long distance trips and you should opt for these if you can.

The roads are generally in good condition and the bus service is relatively modern. The downside is the very frequent military checkpoints which can add hours to a trip.

The rainy season is April till September when the risk of getting Malaria is considered high.

Citizens from all ECOWAS countries, as well as citizens from 9 other countries may enter on a free visa. Other visitors are able to apply for an E-Visas online beforehand which allows them to receive 3 month visas on arrival at Felix-Houphouet Boigny International Airport in Abidjan.

The official language is French. In the tourist sector most can speak english.

The currency is the West African CFA Franc

Generally November to April will be the best time for surfing in Ivory Coast, though the biggest swell hits Ivory Coast from April to September.

Check out pictures of surfing in Ivory Coast here #ivorycoastsurf