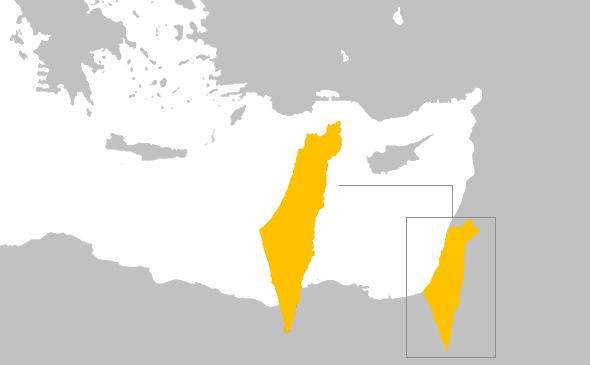 Israel is a middle eastern country known as the Holy Land. The country receives thousands of tourists and peregrines from three different religions every year that come to visit mostly the holy city of Jerusalem. Israel's strategic position at the far eastern end of the Mediterranean sea means that every swell generated in this waters will eventually reach the israeli coastline at some point. Most of the surf consists of wind swells but there are also periodic mid-period swells that can produce up to 8ft waves. Israel has 190km of coastline that boasts a vast kind of setups like reef, point and beach breaks. There are many surf spots scattered along the coast from Tel Aviv and Herzliya to Haifa, Netanya, Ashkelon and even in Gaza. The prime surfing area is located at the central coast of the country and Tel Aviv is the birthplace and main hub of surf in the country. A Californian surfer named Dorian Paskowitz brought the first surfboard to Tel Aviv in 1956 and since then the surfing community has been thriving. Israel may seem like an odd place to go for a surf holiday, but the country has no shortage of cultural diversions and is the perfect destination for beginners and laid-back surfers who are seeking more than just waves. If the surf is not pumping you can always pray for the gods to send some holy waves.

The climate in Israel is mostly hot and sunny. The northern and west coast of the country have a Mediterranean climate characterized by hot and dry summers and cool rainy winters. The southern and eastern areas have an arid climate. The rainy season extends from October to early May, and rainfall peaks in December through February. During the summer, the temperature of the water can be up to 29°C, while the water in winter is colder and can go down to 14°C. There are waves throughout the whole year, but the best time to surf in Israel is  during the winter time from November to April. This is when the surf is more consistent and bigger and swells can reach up to 8ft. During the summer the waves are smaller and less consistent and average around 2-3ft.

There are many places where you can rent gear. Boards start at $15 USD an hour.

Cellcom is a good choice.

SIM cards can be purchased from most mobile phone shops and in some kiosks.

Israel has extensive public transport networks. Buses and trains do not run on the Sabbath and Jewish holidays.

Sherut Service taxis, which leave when full, are generally quicker than buses on major routes.

Taking a ‘special’ (speshel; ie nonshared) taxi can be very convenient but be careful to not get overcharged, ask for the meter to be turned on.

In Tel Aviv, you can even swipe your credit card and hop on a bike.

Citizens from 99 countries, including EU, US, and Australia, can enter Israel without a visa for up to 90 days.

Hebrew is the official language. English is widely spoken.

The best time to surf in Israel is during the winter time when the swells are more consistent.