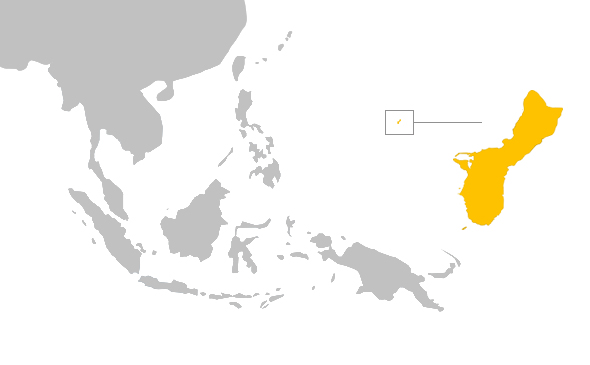 Guam is an island located in the North Pacific Ocean known for being a popular tourist destination due to the round year tropical weather and warm sandy beaches. The island is an unincorporated territory of the USA and an important strategic point having most of the land area occupied by American Airforce and Naval bases. Like it’s ocean neighbors Guam it’s also a popular surf destination. Surfers started riding the waves on Guam in the early 1960s and soon the island became a trendy surf destination. The best time to surf in Guam is during winter, fall, and typhoon season. There are a handful of beginner surf spots in the island but the majority of the spots are shallow reef break and are better suited for intermediate and advanced surfers. There are also secret spots on Guam but they are secret for a reason. Many of them you may not be able to access without getting onto private property, others you will need to rent a boat. But don’t worry too much about them, there will always be some waves breaking somewhere on the island. If you really want to find the secret spots your best chance is to meet up with some locals surfers at the surf shops around the island. Local knowledge is key in a place like this, where swells, wind direction, currents, and tides have a big effect on surf quality. You should include Guam in your bucket list of surf destinations and enjoy the untapped reef breaks that offer adventurous surfers a unique opportunity to surf world class waves in a tropical paradise

As in most islands in the western Pacific, the climate on Guam is tropical with warm temperatures throughout the whole year. There are two distinct seasons: a dry season from January to May, and a rainy season from July to November; June and December are transitional months. The average temperature on the coast is around 27°C (81°F) and the water temperature is extremely warm, averaging around 29°C (84°F), with no significant changes throughout the year. The most consistent time to surf in Guam is during winter, fall, and typhoon season. Typhoon swells are relatively consistent from July through September, and north swells are more frequent from October and March.

There is one place where you can rent gear.

DoCoMo Pacific is a good choice.

SIM cards can be purchased from DoCoMo stores.

Public transportation can be a little unpredictable.

Buses are available, but the frequency at which they operate is very unpredictable, you may end up waiting 2+ hours for a bus.

There are plenty of taxis to get you around.

Citizens from 39 countries, including Australia and the UK, can enter Guam on a visa waiver, but they must obtain electronic authorization (ESTA) beforehand. There are a handful of countries that are visa exempt, like Canada. All other visitors require a visa to enter.

English and Chamorro are the official languages of Guam, English being the dominant language.

The currency is the United States Dollar ($).

The most consistent time to surf in Guam is during winter, fall, and typhoon season.