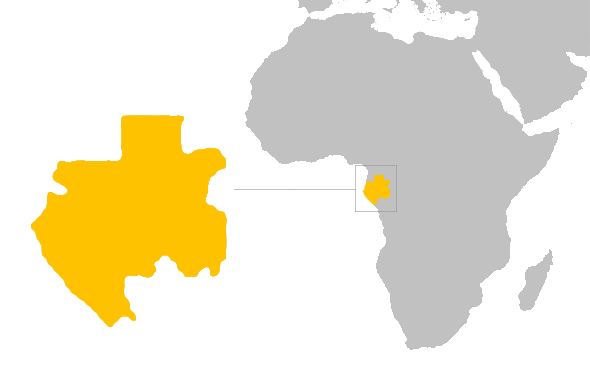 Gabon is a relatively small african country located at the central coast, just below the “Armpit of Africa. The country has significant areas of protected parkland which says a lot about the beauty and natural resources of this nation. White sandy beaches, lush green jungles, untouched wildlife and goof infrastructure should make this an easy tourist destination but surfing in Gabon is not a big thing yet. There are plenty of perfect reeling left-handers scattered along the 267km of coastline due the good exposure to roaring forties swell, particularly in the Southern Hemisphere winter months. The best time to surf is from April to October and the most consistent months are from June to September. The best things about the surf conditions in Gabo is that the water is warm year round and there is rarely any wind affecting the waves so any swell that hits the coast won’t be blown out. Another positive side is the lack of crowds. Most of the surfers in the country are expats because west africans have developed a great fear of the ocean forcing them to stay on dry land and with limited swimming skills. The great majority of surf spots are located close to Port-Gentil and the capital, Libreville. Making a surf trip to Gabon is having the opportunity to surf in a totally different place, surrounded by nature at all times and definitely out of the beaten path.

Most of Gabon’s well known surf spots are located around Port-Gentil and the capital, Libreville, but the best waves are found down south in the Loango National Park. Here are the registered surf spots in Gabon: Gombé, Cap Lopez, Palplanche, Guegue, Ekwata, La Ferme aux Crocos, Mayumba and PG2.

There are very few paved roads. For long distance travel the most comfortable and quick options are to take internal flights or the Trans-Gabon train.

Buses run between major centres and are very cheap.

Taxis are found in all towns. You can hire the whole vehicle, known as 'une course' or you can just buy a seat in a shared taxi, known as 'une place'.

Car hire is available but you'll need a 4WD if venturing out of town and they are extremely expensive. You’re better off hiring a driver at around $60 USD a day.

French is the official language.

April to October and the most consistent months are from June to September.