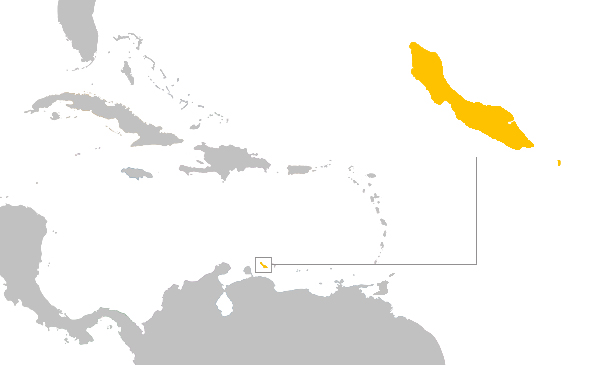 Curaçao is a dutch island country located in the south of the Caribbean Sea and its part of the Lesser Antilles. Curacçao is famous for being a tropical gem full of beaches tucked into coves and beautiful coral reefs abundant with marine life and also holds some high quality surf spots. The best waves are located on the north coast of the country that is more exposed to swells coming from the north atlantic ocean. Playa Kanoa is the most famous surf spot in the island and has easy access reef breaks that receive a wide range of swells from E-NW. The surf conditions in Curaçao are heavily affected by the easterly trade wind that prevails all year long. The wind can improve the conditions in some spots or blow onshore in others. Usually the optimal time to surf is during the glassy early morning before the wind kicks in. The most reliable period of the year to surf in Curacçao is during the North Atlantic winter when consistent swells are sent down south reaching the north coast of the island. Although the best waves in Curaçao occur during the hurricane season these kinds of swell are very inconsistent and extremely unpredictable. Besides surfing the island is known for being home to one of the biggest and brightest Carnival celebrations in the Caribbean.

The climate in Curaçao is tropical with hot weather all year round. Daytime temperatures range around 28°C (82°F) from December to February and around 31 °C (88 °F) between May and October. From January to September the island experiences a dry season and from October to December the weather pattern is more humid with more rain. The best and most consistent period of the year to surf is from October to March when solid swells coming from the North Atlantic ocean reach the shores of Curaçao. From June to November, but especially from August to October, it’s the hurricane season. Hurricanes rarely reach Curaçao and the Leeward Antilles because of their southern location. However, hurricanes can sometimes reach the island causing some damage. They can also produce the best surf conditions but they don’t happen many times per year.

The best surf spots in Curaçao are located on the northeast coast. The most famous breaks are Boca Pistol, Boca Sint Joris, Klein, Playa Kanoa and Playa Lagun.

There are a few places where you can rent gear.

Digicel is a good choice. SIM cards can be purchased from Digicel retailers and stores.

The public transportation in Curacao is very limited.

Buses cover the majority of the island, but service is infrequent, especially outside of Willemstad.

Taxi fares are unmetered, and drivers may have fare-sheets available. A surcharge will be added to taxi fares if it is before 06:00am or past 11:00pm (25%).

Car rentals start at around $25 USD a day.

Citizens from 87 countries, including EU, US, and Australia, can enter Curacao without a visa for up to 90 days.