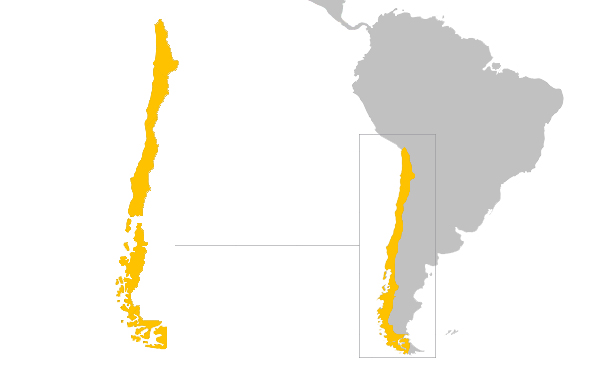 Chile is a long country stretching along the South American western coast. With more than 4 thousand km of exposed coastline the country is known for being a goofy-footer paradise and having many world class surf spots. The consistent amount of swell that Chile receives from the extremely active Pacific Ocean is making it one of the top surf destinations in South America. Another feature of the chilean waves are the diversity of conditions that can go from mellow beginner waves to huge tow-in mountains of water. The most famous surfers from the country are Ramon Navarro and Cristian Merello, both renowned big riders in the international surf community showing the potential of the big wave scene in the country. The country can be split in 3 areas. The north attracts more surfers because it's warmer and there is almost no rainfall due to the presence of the Atacama Desert, the driest desert in the world. There you will find good point breaks with rocky bottoms that create the best and most famous waves of the country like Arica and Iquique. The central area near the capital of Santiago is the one offering easiest access to the breaks. These surf spots can be perfect for beginners on small days or challenging for advanced surfers when steady swells reach up to 15 - 25ft. Last but not least you have the south area that can be colder than the rest of the country but offers amazing hollow left-handers that will make your tube riding mileage grow as fast as you can imagine. With an average of more than 300 days of good waves per year, Chile is the perfect destination for your next surf trip.

Chile has many weather patterns due to its unique shape and length. Most parts of the country have 4 seasons and because Chile is located in the south hemisphere they are inverted compared to Europe and North America.The climates range from desertic with mild temperatures in the north, Mediterranean with dry summer and moderate wet winter in the center. Oceanic in the south with lots of rainfall throughout the year and cold in the Andes Mountains where winters can be very snowy making it a perfect place for sky resorts. Generally speaking the coast has mild weather compared to the extreme temperatures of the mountains. Winters are rarely too cold and summers are warm with pleasant temperatures in the coastal areas. The country has waves all year round and although the entire coast has an extremely high rate of surfing days the south has bigger and more consistent conditions compared to the north. During the winter in the southern and central coasts  it is not uncommon to have 15ft waves, with 25ft waves registered on a regular basis. The average water temperature in the south coast is 15°C (60°F) so make sure you have the proper gear to endure the cold water. We recommend a 5/4 wetsuit plus booties, gloves and a hood. The north coast enjoys warmer weather conditions and the water temperature varies between 14-20°C (57-68°F) so wetsuits are only a must during the winter time.

Chile has many amazing surf spots to be explored all over the 4 thousand km of coastline. The northern coast has world class reef breaks breaking close to the beach and the best surf spots are located in the areas of Arica, Iquique, Antofagastas and around the Atacama Desert. The best time to surf in these areas are in spring from September to November. Summer also has good conditions with nice northerly swells that reach the coast. El Gringo aka “Chilean Pipeline” in Arica is a gnarly A-frame breaking on top of a sharp reef and probably the most famous wave of the north coast of the country. Other famous surf spots are El Colegio, La Bestia, El Buey and La Urracas all located in the area of Iquique. In the Atacama Desert area we can highlight Playa Villa Alegre, Grande Ligas and La Vedette.

On the central coast near Santiago you will find Pichilemu, which is the surf capital of the country. This coastal city has lots of surf breaks that can fit any surfers ability. The best surf spots for beginners are Las Terrazas and La Puntilla. Infiernillo is a good option for more skilled surfers and the renowned surf spot of Punta de Lobos is exclusively surfed by experts. The locals here are known for being extremely nice and always helpful with those who are courageous enough to paddle out at this big wave surf spot. Punta de Lobos is considered the best left-hand point break in Chile. Other famous surf spots in central Chile are Reñaca, Ritoque, Totoralillo and Coquimbo.

There are many surf schools around Chile which are located close to the popular surf spots. You can rent a board for $5 USD for 4 hours, or $10 with a wetsuit.

Movistar is a good choice. You purchase SIM cards in supermarkets, kiosks and other sales points and then top up with a data pack. Prepaid packages cost anywhere from $3-6 USD.

Chilean bus routes are plentiful and fares are cheap (around $0.70 USD for a short trip.

Taxi Colectivos resemble taxis but run on fixed routes much like buses.

If you’re in Santiago you have the option of the metro.

Uber is also an option in major cities.

Very cold water in the South. Powerful and hollow waves, which easily break a lot of boards. Earthquake-prone.

Citizens from 93 countries, including -EU, US, and Australia- can enter Chile without a visa for up to 90 days.

Chilean peso (CH$) is the currency.

Surfing in Chile is possible all year except for the winter months, unless you bring your tow-in gear.

Checking the forecast about a week before your trip is always a good idea. Understanding what the waves will be like and knowing what gear to pack is essential. You can check the forecast for the waves here.
Do I need pack a pharmacy kit

Check out pictures of the surf in Chile at #chilesurf.