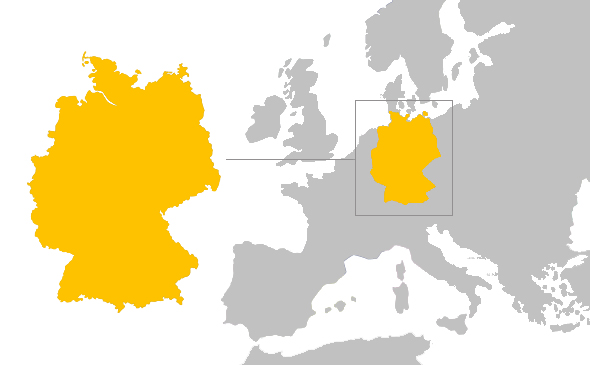 Surfing in Germany is surprisingly a popular activity. The country has more than 3.500 km of coastline bathed by the North and Baltic Seas. The best surf spots are located either on the offshore island of the west coast or near the border with Denmark but the most famous surf spot in Germany is actually the endless wave of the Eisbach River in Munich. This is the most popular river wave in the world and is located right in the middle of the city at the central park. It has attracted lots of surfers since the 1970s and recently many videos on the internet made this wave famous in the international surf community. Besides surf Germany is a major cultural and historical reference in Europe with plenty of tourist attractions to be visited in between surf sessions. Although this will probably not be your standard surf trip, surfing in Germany will be an exotic experience that is totally worth being done at least once in a lifetime.

The climate in Germany is mainly moderate with continental and marine weather patterns. Winters are cold, cloudy and wet while summers are cool with sporadic warm wind coming from the alps. The western part of the country has more rainfall due to the strong influence of the Atlantic Ocean. In the middle of the country the winter is colder but summers are warmer with moderately higher temperatures in the southwest. Average winter temperatures are around 1°C (34°F) in January and during summer oscillate around 20°C (68°F) with July being the warmest month of the year. The water temperatures are cold throughout the whole year and a 4/3 is the minimum protection required. The average water temperature during winter is 7°C (45°F) and during summer increases to 14°C (57°F).

Most of the best surf spots in the country are located in the Northwest part of the country, specifically the coast that is bathed by the North Sea. There you will find Buhne 16 Kampen, Kartoffelkiste Wenningstedt, Brandenburger Strand Westland, Samoa Rantum, Norderney, Isle of Amrum, Juvre, St. Peter Ording and Borkum. In the Baltic Sea there are less consistent conditions but still some good spots like Pelzerharken, Weibenhauser Strand, Hohwatcher Bucht, Binz, Boddenstrand, Warnemünder Beach and Damp 2000. However the most famous surf spot in Germany is located in the Bavarian area more precisely in the landlocked city of Munich. It’s an endless wave that “breaks” at the Eisbach River and everyday attracts many surfers that line up and wait for their turn to have a go even at the peak of winter when it’s snowing.

There are a few surf camps that you can probably rent gear from, but it might be best if you bring your own.

Deutsche Telekom is a good choice. SIM cards can be purchased from big supermarkets, drugstores, service stations, or an operator's store. Prepaid packages start at $12 USD.

Germany has an extensive train network for both long-distance and regional travel. In cities and larger towns there are plenty of public-transport options; buses, trams, U-Bahn (subway), S-Bahn (suburban train) and taxis.

In some cities Uber is available.

Car rentals start at around $43 a day.

Citizens from many countries, including North/Central/South America, and Australia, can enter Germany without a visa for up to 90 days.

The official language is German. In larger towns and cities you’ll find English speakers too.

Late summer to autumn when the water temperatures are a tiny bit warmer.