PLAYA HERMOSA Surf Tours & Resort Overall rating: 0 out of 5 based on 0 reviews.

Sitting at the base of Costa Rica’s Hermosa Hills in the Puntarenas Province, the resort is located in Playa Hermosa, which can easily claim to have the most consistent and quality surf in Costa Rica. Not as touristy or as lively as the neighboring town of Jaco to the north, Playa Hermosa is a smaller community, a bit more laid back and tends to attract those who want to spend more time in the water than out.

Playa Hermosa has several miles of uninterrupted coastline, and there are loads of empty peaks up and down the beach, enough to satisfy the hungriest of surfers as well as every level of surfing. With warm water and an abundance of sunshine Playa Hermosa is an excellent choice for a relaxing and hassle free surf holiday, while the Resort offers first class accommodation and guided tours to the best surf spots of the area. 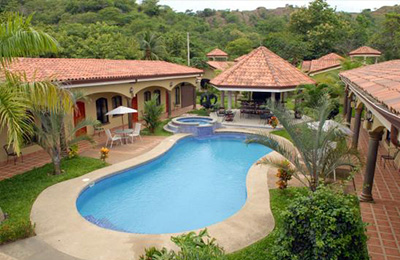 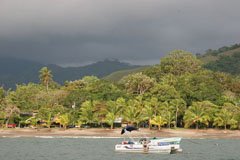 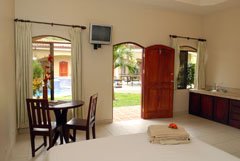 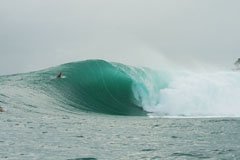 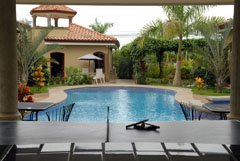 For surfers, Playa Hermosa Tours & Resort organizes surf tours to the best breaks in the area according to current swell, tide and wind conditions, under the expert guidance of a seasoned local guide.

The Resort offers a complete range of amenities including:

The Central Coast region centered around Playa Hermosa offers some of the best surf in the country. With world class waves, Playa Hermosa holds the International Quicksilver Surf Championships every year in August that literally brings hundreds of expert surfers here from all over the globe. Costa Rica and Playa Hermosa were also recently selected to host and organize the Billabong World Surfing Games Costa Rica 2009.

If youre keen to venture off, the resort offers guided tours to some the best breaks in the area, of which there are about a dozen. Boca Baranca is a smoking rivermouth lefthander, while Escondida is a solid reef break with fun left and right barrels. Your guide will know exactly where to go and hell put on the best waves according to the current conditions and your ability level.

Costa Rica is a small country located in Central America and one of the trendiest holiday and adventure-travel destinations in Latin America – One of Costa Rica’s main sources of income is tourism. Costa Rica is also a democratic and peaceful country, and was the first in the world to constitutionally abolish its army back in 1949.

Costa Rica is located on the Central American isthmus, 10° North of the equator. Bathed by the Caribbean Sea to the east and the Pacific Ocean to the west, the country extend on an narrow stretch of land from Panama in the south to Nicaragua in the north. The highest point in the country is Cerro Chirripó, soaring at 3,820 metres (12,532 ft) and  the fifth highest peak in Central America. The country is ranked 5th in the world and 1st among American countries in terms of Environmental Performance. Although the country is small, it shelters 6% of the existing biodiversity in the entire world and 25 % of the country is under natural conservation protection (National Parks and Nature Preserves).

There are two Playa Hermosa in Costa Rica, one in the province of Guanacaste in the north and one in the province of Puntarenas. As its name implies, Playa Hermosa is a beautiful beach and seaside resort located on the Central Coast of Costa Rica in the north Puntarenas Province,  just four miles south of Jaco, a lively town about two hours west of the capital San Jose. The Manuel Antonio National Park, which is Costa Rica’s most famous national park, is about 45 minutes away.  There is also the Playa Hermosa Wildlife Refuge, a protective reserve for the Olive Ridley sea turtles that come ashore to nest here each year.

Costa Rica sits close to the equator and has a tropical climate all year round. It is characterized by a dry season from November through April which sees very little wind. The rainy season will begin in May with late afternoon showers and variable winds. Water temperature will hover around 26ºC (80ºF) all year round.

Playa Hermosa (North Puntarenas) 90 km west of San Jose (2 hour drive) Airport transfers are included as part of the Surf Tour packages. For accommodation only, airport tranfers can be arranged for an extra 100 USD each way. A representative of the camp will meet you upon arrival in San Jose Airport

Citizens holding valid passports from the European Union, USA, Canada, Australia, New Zealand and Japan are permitted to stay in Costa Rica for 90 days without a visa. For other countries, please check before. All travelers must carry a passport that remains valid for at least six months after the date of entry. No vaccine are necessary.

For non surfer companion, Adventure Tours are also available, including the same as Surf Tours, but with excursions instead of surf.