On the mythical California Pacific Coast north of Los Angeles, this surfcamp is located in Carpinteria, a small town in Santa Barbara county home to the Sex Wax factory, the famous wax used by surfers all over the world !

This Surfcamp includes hotel accommodation, surf lessons, material and guided tours to the best surf spots in the area. You will be surfing the legendary waves of “Big Wednesday” while enjoying the Californian lifestyle. Santa Barbara is the native county of many world class surfers and enjoys good waves year round as the coast benefit from both the North and South Pacific groundswells. 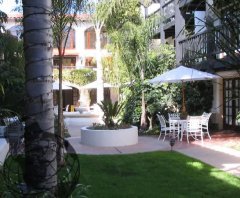 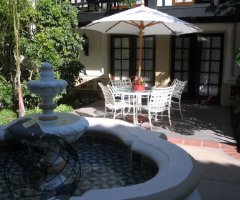 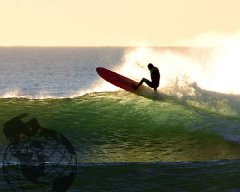 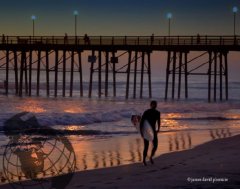 This Surfcamp includes hotel accommodation, surf lessons, material and guided tours to the best surf spots in the area. You will be met at the Airbus station from Los Angeles Airport and taken to the hotel in Carpinteria. There are two accommodation options:

The hotel is a nice colonial style building five blocks away from the beach, with bar, restaurant, inner garden, outdoor swimming pool and fitness studio.

Built around a central patio with a swimming pool, Motel 6 is just 2 miles from the beach and Santa Barbara Polo Grounds

The owner of the surf school has over 30 years experience and has personally taught thousands of students how to surf. He is assisted in his task by CPR certified instructors, committed to provide guests with the highest level of service.

Santa Barbara is the native county of many world class surfers. In winter, the low pressures in the North Pacific generate long period of groundswells that produce massive waves. In summer, low pressure system in the South Pacific produce even larger groundswells travelling 1000’s of miles to hit the coast of California.

The best breaks in Santa Barbara are either North of town beyond Point Conception or south of town in Ventura county. The area most famous breaks are Rincon, a world class left point break, and Jalama, a regional classic and very consistent left & right beach break. Good waves year round as the coast benefit from both the North and South Pacific groundswells.

Fifteen minutes from Santa Barbara and home to Sex Wax HQ, Carpinteria is a lovely little Californian town with a large sandy beach and reputed for its polo matches. The old Spanish town and resort community of Santa Barbara is a nice trendy place to hang out. Ninety minutes north of Los Angeles, Santa Barbara nestles between palm-lined white sandy beaches and the foothills of the Sant Ynez Mountains on the “American Riviera”. This resort community of whitewashed stucco and red tile roofed houses has a gracious, relaxed atmosphere. Founded by the Spaniards in the 18th Century, the town’s historic streets are lined by boutiques, galleries and trendy cafés and restaurants.A must visit in the region are the Channel Islands Marine Sanctuary, 40 miles offshore from Santa Barbara. Los Angeles and Hollywood are also within easy reach.

Rates are per person

We recommend 2 weeks for maximum progression !