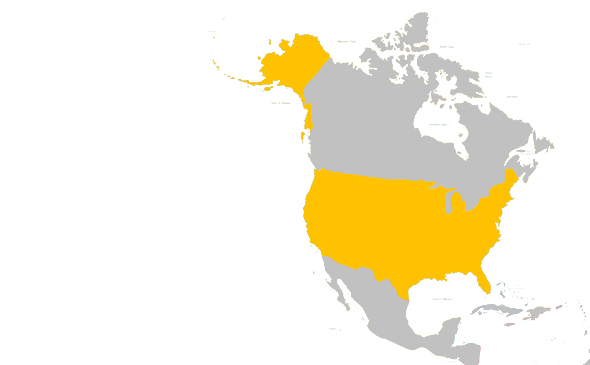 The United States of America is the third largest country in the world and has thousands of incredible surf spots scattered around the Pacific, Atlantic and Gulf of Mexico. The country is known for having a long history of beach and surf culture that influenced music, language, fashion and lifestyle. The famous american rock band “Beach Boys” is world wide recognized for their greatest hit “Surfing in USA”. Hawaii is the birthplace of modern surf and it’s arguably the best surf area in the country. Every surfer dream is to surf the legendary hawaiian waves of Pipeline, Sunset Beach and Waimeia at least once in a lifetime. The USA is also home for the greatest surfer of all times and 11x world champion, Kelly Slater, and other famous surf figures like Duke Kahanamoku, Eddie Aikau, Laird Hamilton, Rob Machado, Andy Irons and many others. There are no shortage of great surf spots for all kinds of levels of surfers both on the east and the west coast. When it comes to surf holidays the USA should definitely be one of the top destinations in the world.

The climate in the United States of America (USA) is mostly temperate but due to its large size there are different weather patterns in some areas. Alaska has an Arctic tundra climate. Northern California is colder than the south but most of the state has great weather throughout the entire year and presents a Mediterranean climate. Hawaii and South Florida have a tropical climate with warm and pleasant weather. The east coast of the USA has a humid subtropical climate. The areas surrounding the Gulf of Mexico are always affected by the hurricane season. El Niño and La Niña affect Florida’s climate drastically. In general the best time of the year to surf in the country is during the winter months from November to March.

There are plenty of places where you’ll be able to rent gear. A surfboard rental starts at $10 USD an hour.

T-Mobile or AT&T are a good choice. SIM cards can be purchased from official retailers.

For longer distances you can take a bus, plane or train.

You’ll find taxis (always metered) in most cities as well as suburban areas.

Uber and Lyft are also in most cities and towns.

Rental cars start at around $25 USD a day.

Citizens from 39 countries, including Australia and the UK, can enter the US on a visa waiver, but they must obtain electronic authorization (ESTA) beforehand. There are a handful of countries that are visa exempt, like Canada. All other visitors require a visa to enter.

The US has no official language, English is regarded as the de facto national language.

In general the best time of the year to surf in the US is during the winter months from November to March.

Check surf pictures of the USA at #surfusa.