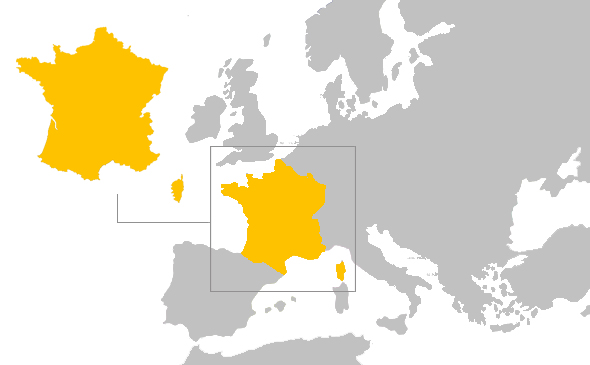 France is probably the most traditional surf destination in Europe with almost 3.500 kilometers of coastline and hundreds of beaches that can be surfed all year round thanks to the strategic position on the west coast of Europe, just below England, creating great swell consistency. The internationally renowned french cuisine and their wines, the vibrant nightlife and the cultural background makes this country one of the most exciting places to surf in the whole world. Every year during the summer a horde of surfers invade the french coast looking to enjoy the nice food, the relaxed vibe and the best waves on the continent. They are easily recognized by the surfboards on the top of their cars or next to their tents. France's most popular waves are in the southwest. This long stretch of sand (200km) has many high quality surf breaks but one spot stands out above the others. The world class waves of La Nord and La Graviere in Hossegor break in front of a deep water trench that divides the continental shelf, delivering massive Atlantic power straight onto the beach in the form of perfect barrels. This is where every October the WSL organizes the Quicksilver Pro, an exciting contest that attracts locals and tourists who come to watch the best surfers in the world perform just a few meters away from the beach. For these reasons France should be a destination on every surfer’s bucket list.

France enjoys a temperate climate. Although you can find alpine temperature in the highest mountains the oceanic and mediterranean temperature prevail in the rest of the territory. The country enjoys cool winters and mild summers except along the Mediterranean where you have mild winters and very hot summers. The average winter temperatures range from 0°C to 8°C  (32°F to 46°F). During the summer the average temperatures range from 16°C to 24°C (61°F to 75°F). France has great swell consistency with waves throughout the whole year. Winter is the best time to surf although the temperatures can be a bit cold. The high surf season happens in summer and still enjoys good surf with great weather. In the north the water is colder and the surf spots are very tide dependent, while in the south the water gets warmer and the surf is more consistent.

France has waves in the Atlantic Ocean and the Mediterranean Sea but the best surf spots are located on the Atlantic coast. The Basque Coast offers great waves. Surf spots like Parlementia, Lafitenia and Belharra can deliver giant bombs on a solid swell.

Up North you have the heart of the French surfing culture: the Anglet/Biarritz area. The best surf spots in this area are Les Cavaliers, Côte des Basques and the Grande Plage.

Hossegor is probably the most famous surf area in the country. Les Culs Nuls, La Gravière, La Nord, La Sud and Capbreton are great options and attract surfers from all over the world.

After Landes, you get to the Gironde surf spots where you should try the tidal bore river wave of Les Mascarets. Drive to the coast and experience a true classic: Lacanau, one of the most consistent European surf spots.

In the region of Vendée, there are lots of uncrowded surf breaks, but L'Embarcadère is a classic.

In the Finistère region you will find consistent and powerful waves. As you head to the Channel region look for Yport, Calais and Cap Gris-Nez.

The Mediterranean coast is not super consistent but still has some waves. The best waves are located in Canet Plage, Gruissan,Carnon, Galiote and St. Laurent du Var.

There are plenty of shops where you can rent gear. Prices vary depending on where you're surfing and what you need. Boards can be from $15-100 USD for a day to a week.

SFR (Société française du radiotéléphone) is a good choice. Their prepaid package costs $21 USD for 10GB. You can purchase a SIM card at SFR shops, tobacco stores and “Relay” newsstands.

Local transit systems are reliable and cost between $1.15-3.50 USD per trip. Most cities and towns have extensive train, bus, and tram systems.

France has regular trains as well as the world famous high-speed TVGV. Regular trains are much quicker than taking the bus for long distances.

If you’re in major cities you’ll find plenty of buses or taxis to help you get around. If you’re in Paris you can easily take the Metro anywhere. All of the big cities also have Uber.

You can find car rentals starting at $30 USD a day.

Cold water, crowded summer surf. Forest fires can occur in southern France during the summer months and there can be risks of flooding and earthquakes as well.

If you are from the EU and 8 other countries you can freely enter. Citizens from 53 countries, including the US, Australia and Canada are visa exempt, allowing you to stay for up to 3 months.

Official currency is the Euro (€)

Autumn and spring are the best times for surf. However, thanks to its consistent swell, France is a year-round surfing destination. With conditions in the summer being great for beginners.

Dial 112 for all types of emergencies.