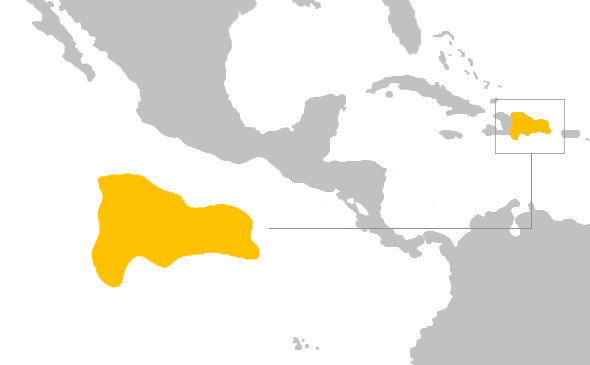 The Dominican Republic is located on the island of Hispaniola and it's the second largest and most populous country in the Caribbean. There are good waves on the Atlantic Ocean to the north and the Caribbean Sea to the south.The country has many inland mountains that can change or block the easterly trade winds producing better and more consistent surf conditions than other areas in the Caribbean. Hispaniola is the 22nd largest island in the world and Pico Duarte is the highest peak in all the Caribbean islands reaching over 10,100ft high. Besides this fact the main features of the country are definitely on the coast. Golden sandy beaches attract tourists from all over the world. The most popular destination among surfers is the Amber Coast, especially in between Puerto Plata and Cabarete. This is a true tropical surf paradise that has a great deal of reef breaks facing lots of angles creating endless swell opportunities. Azure water and the stunning scenery of tropical jungles, rocky cliffs and empty beaches make the Dominican Republic a memorable surf destination. Besides surfing you can scuba dive, stand-up paddle, climb waterfalls, rest in hammocks or party hard all night long. The D.R. should be in every surfers bucket list because there are plenty of waves to explore, lots of cool people to meet and enjoy the best that the Caribbean sea has to offer.

The climate in Dominican Republic is tropical maritime with constant trade winds smoothing the heat and two distinct seasons. The wet season is from May to November in the south and from December to April in the north. Hurricanes can also happen in between June and November. The north part of the island experiences more rain than the south and west. Average temperature in the capital Santo Domingo is around 24°C (76°F) in January and around 27°C (70°F) in August. There are consistent waves throughout the whole year. The North coast is the most consistent surf area with a diversified kinds of surf spots. Autumn and winter are the best and most consistent time to surf, but the north coast of the island is extremely exposed and has waves 340 days of the year.

Dominican Republic has lots of surf spots suitable for all kinds of surfers. These are the best surf spots in the DR. Cabarete is the most popular surf spot on the North coast. Playa Preciosa is one of the best waves in the Caribbean area. This wave is better for advanced surfers. Sosua Bay is quite fickle and only works with a huge North swell. Encuentro is the most consistent spot on the North coast. This break has several peaks: the main one is a right hander with an easy channel to paddle out. Bobo’s’ is another peak and it’s consistent and fun. Destroyers are close to Encuentro and it's a very fast and shallow wave with nice barrels. Coco Pipe only works on a good North Swell (mostly during winter time). Bozo Beach is right in the center of Cabarete. This beach break only works properly during winter time and it's popular among aerialist surfers. Mananero is a fast left and right beach break just out of Cabarete. It works better in summer time, and it’s very affected by the wind. Playa Grande has a heavy shore break and a few good sand banks for longboarders. La Preciosa and El Barco are right next to Playa Grande. Both are high quality waves, not recommended for beginners. On the south coast the highlights are the rivermouth wave of Playa Bahoruco, and a reef break at Santo Domingo called Guibia.

You can find rental gear in the Dominican Republic. Surfboards start at $20 a day.

Claro is a good choice. SIM cards can be purchased from official stores and authorized resellers.

Públicos are unmetered multi-passenger taxis that travel along main areas, stopping often to pick up people waving from the side of the street. A público is marked by a white seal on the front door. You must tell the driver your destination when you're picked up to make sure the público is going there. A ride is around $0.36 USD.

Public buses are called guaguas (pronounced "gwa-gwas"). For about $0.18-0.30 USD, they provide the same service as públicos, but they're generally more crowded.

Uber can be found in Santo Domingo, Santiago, and Puerto Plata.

Some reef breaks. Tropical storms and hurricanes between August and October.

Citizens from 108 countries, including the EU, US, and Australia, can enter the Dominican Republic without a visa for up to 90 days.

The official language is Spanish. English is spoken in the tourist areas, but we suggest that you learn some Spanish phrases before you go.

The currency is the Dominican Peso.

Autumn and winter are the best and most consistent time to surf, but the north coast of the island is extremely exposed and has waves 340 days of the year.