Mint Surf Morocco Overall rating: 5 out of 5 based on 6 reviews.

Taghazout is a dream for European surfers, with year-round warm water and weather, waves for every level of surfer and a unique culture to experience. Our beautiful accommodation is on the sea front in the centre of Taghazout. Watch the sun rise and set over the ocean or check the waves from the terrace at our surf camp, or from your own private balcony at our apartments.

We feel that there’s a real sense of community with our guests. Our friendly and dedicated team are passionate about what we do, and want to give you the best experience possible, which is why we are on-hand 24/7 to help you with whatever you need. Every one of us loves surfing, yoga and Morocco, and it’s our job to show you why. We’re here to offer advice about the best places to go, digest about your day’s surf, or show you the best places to hang out in town.

In your free time, or if you fancy a day off, we offer trips to paradise valley and the souk (market) at no extra charge. Or you can enjoy a sunset yoga flow class with our qualified yoga instructor in our sea-front yoga studio, which is ideal for relaxing and restoring the body after a long day’s surf. If you want to relax even more, we can organise a restorative trip to the hammam with massages and other treatments available.

We offer a variety of packages which are tailored to your needs. All our week-long packages include airport transfers, accommodation, breakfast, lunch and unlimited transport to and from the surf. On top of that you can add beginner or improver lessons, guiding or car hire if you want a more independent trip 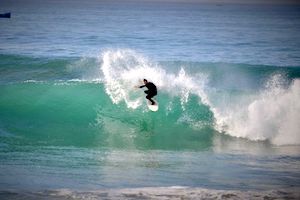 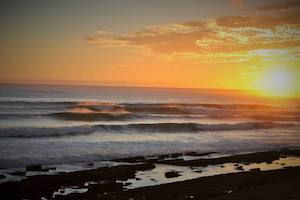 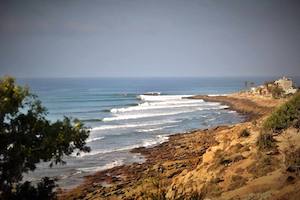 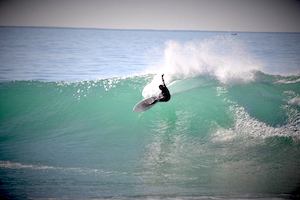 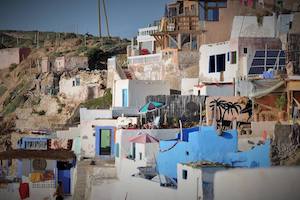 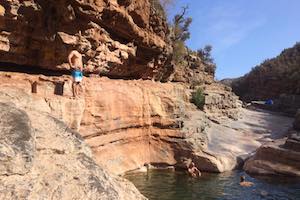 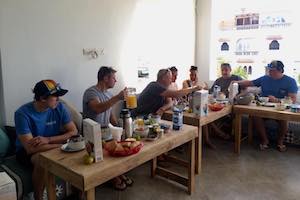 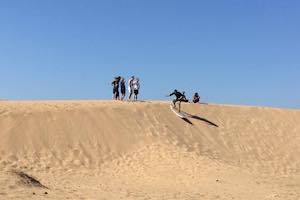 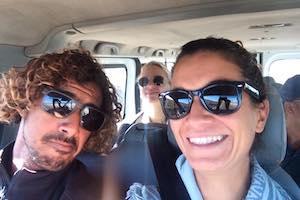 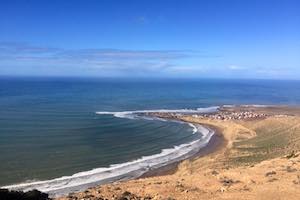 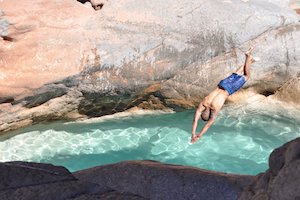 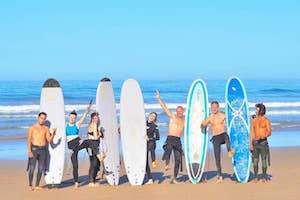 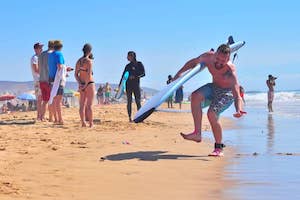 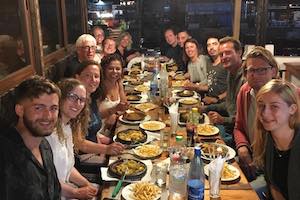 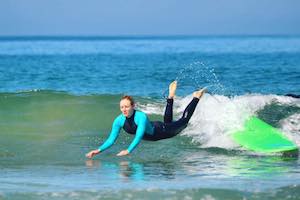 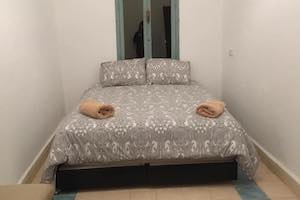 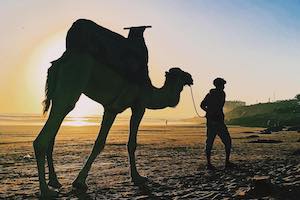 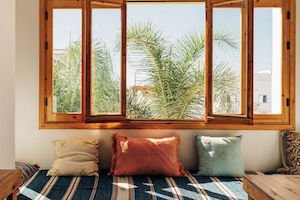 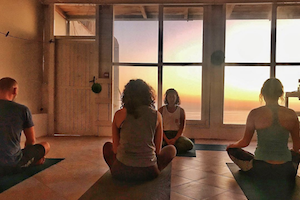 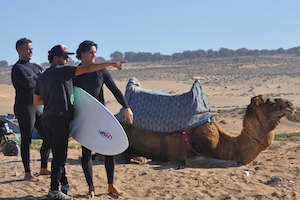 Our apartments are all recently refurbished old-style Moroccan buildings, using traditional Moroccan design elements with a cool, modern twist. We cater to travellers who like their privacy, so the rooms are all private with no bunk beds. The rooms are all comfortable, with hotel-quality, beautifully pressed, white cotton sheets and comfy duvets.

Whilst waves can be found all year, the best time to come for those who are more experienced is October-March.

Taghazout is famous for having amazing waves and we know all the spots, the tides, swell direction, and wind patterns. With us, you won’t waste time just driving around to find the best surf. We don’t do the guiding by luck. All we need is a few seconds to check the full coast than with our knowledge you can be taken directly to the best waves and we make sure to get you to the surf before everyone else.

We are British and ISA-qualified surf instructors and beach lifeguards in Morocco, so you can have confidence knowing that you’re in safe hands. If you’re just starting out, our beginner’s lessons will give you what you need to fall in love with surfing.

For beginners, we recommend 5 days of instruction followed by equipment rental for the remaining days (with advice and guiding for those remaining days).

Our beginner’s surf camp & lessons package is the perfect start. We’ll set you up with a board and wet suit, and drive you to the best beach for the day. Lessons start as soon as we get there (or when conditions permit). Then you’ll have the rest of the day to practice, supervised by your instructor. Then we drive you back, no walking required!

Our intermediate lessons are perfect for those who can already stand reliably and catch whitewash, but are having trouble progressing to the next step: unbroken green waves. Our instructors will help you paddle out back, choose the best waves, catch them and ride down the line. Take the improver lessons package to boost your confidence, and test out some boards while you’re here.

On flat days (let us know if you are interested in any of these activities, and we would be happy to make arrangements):

We also offer yoga. We feel that yoga after surfing is the perfect way to wind down at the end of the day. Our qualified yoga instructor offers a sunset yoga flow class in our sea-front yoga studio, which is ideal for relaxing and restoring the body after a long day’s surf.

It is designed to stretch and open the shoulders, back and hips for optimum recovery so that surfers can be fresh and get back in the water the next day feeling strong. Private and morning sessions are also available.

Surf shops, restaurants, cafes and the beach are all at your door. Taghazout’s beaches and surf breaks like Panoramas and Hash Point are just steps away.

The north coast of Agadir is populated by beautiful hills that spill into the ocean, creating this area’s numerous surf spots. It is home to a variety of prefect waves, from sandy bottomed beginners’ waves to long glassy point breaks. In winter, storms in the north Atlantic generate long period groundswells that travel 1000s of miles to hit the coast of Morocco and produce the clean waves the area is famous for advanced surfers, the best time to come is October to March.

The small, laid-back towns and the surrounding area not only host the world-renowned surf breaks Anchor Point, Killer Point, Dracula and Boilers, but also has a wide selection of waves for every need and capability, and also offers some of the most consistent waves to be found anywhere. The area has been attracting foreign surfers since the 60s, and locally you can find surf shops, restaurants, pharmacies, Moroccan handicrafts and other amenities.

From Agadir airport it’s a 45 minute drive south east along the coastal road. There are taxis at the airport for 300 dirhams to Taghazout, but you can also arrange a pick-up from us for £25. You can take a bus from the airport, but it’s complicated, as it requires a bus to Inzegane (a city next to Agadir), then another bus to Agadir, to catch a bus to Taghazout.

Air Ninja – This website has up-to-date information on flight/airline/city options.

You can also get direct flights from Dublin, Paris, Amsterdam, and many German cities:

Transfers from Marrakech can also be arranged and take 4-5 hours and cost £100 for 1-4 people. Please contact us if you would like us to arrange a transfer. Or else you can take a bus; we recommend either CTM or Supratours.

√ Accommodation at the surf camp (7 nights)

√ Board and wetsuit hire all day and all week

√ Softtop foam board or NSP

√ Free wifi throughout the surf camp

√ Chauffeur-driven transport to the surf all day (7 days)

(Not available 20-Dec to 15-Jan, please take our guiding or lessons packages at this time)

√ Accommodation on the beach in Taghazout (7 nights)

√ Accommodation on the seafront (7 nights)

√ Chauffeur-driven transport to the surf every day (7 days)

√ Free wifi throughout the surf camp