AWERA RESORT Overall rating: 5 out of 5 based on 4 reviews.

Telescopes Beachfront Infinity Pool Surf Resort is a paradise of endless adventures located in the Mentawai Islands, West Sumatra, Indonesia. Amazing facilities and very interesting surf spots that will make your dream surfing experience come true, from beginners to pro surfers. Mentawai is known to have the best waves in the world, without a doubt you will witness it yourself! We will take you to the natural beauty of Mentawai.

A small and exclusive hotel we have a stunning infinity pool and now the first thermal pool Spa in the Mentawai’s, with a high range of massages and natural treatments plus incredible active experiences from supping up the mangroves, clear kayak adventures and daily yoga sessions. We also have added a new floating platform close to one of the breaks, perfect to watch all the action.

Our beach bar offers a slice of modern design with music, cocktails, wine and good times. Our menu is focused on fresh local produce where healthy eating meets contemporary cuisine giving a great dining experience for everyone.

Our exclusive resort offers the perfect balance between design, comfort and the world-class surfing. 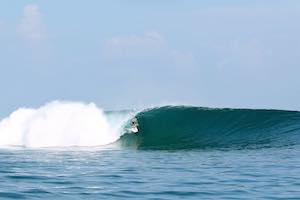 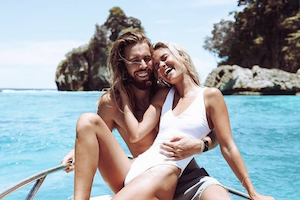 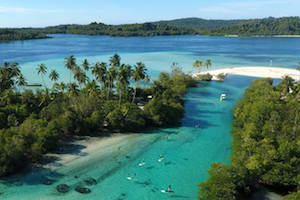 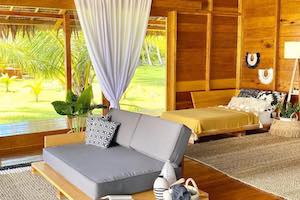 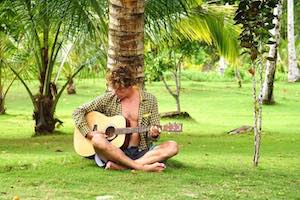 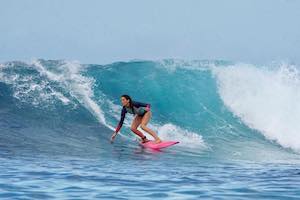 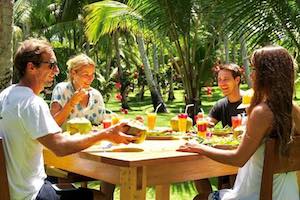 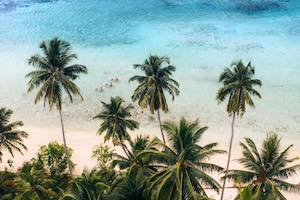 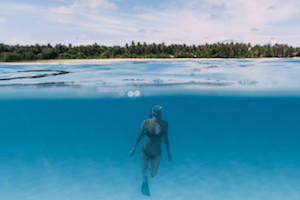 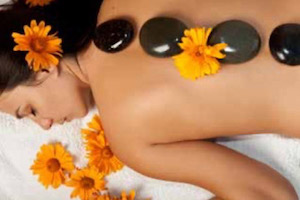 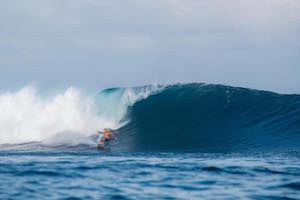 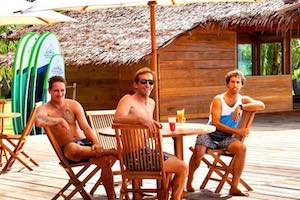 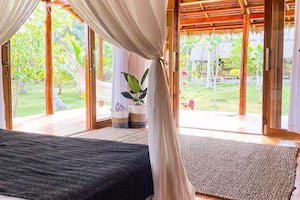 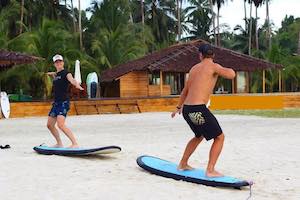 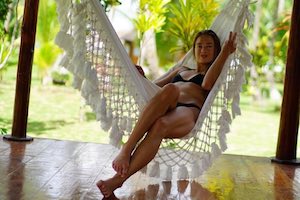 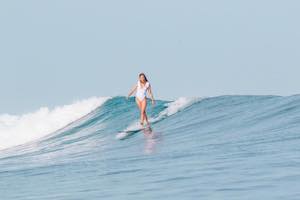 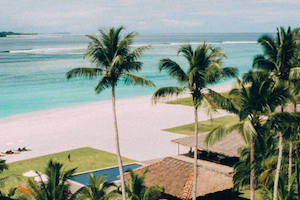 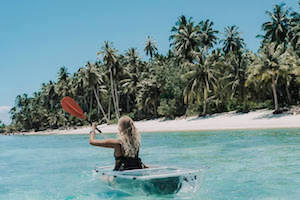 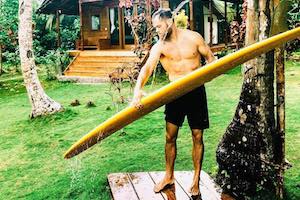 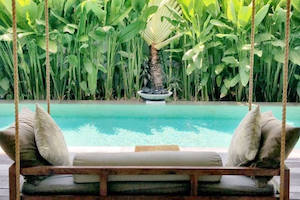 A variety of unique and different properties to suit every kind of group from a couple to a group of friends and large family. Each property/villas now sits in it’s their own secluded garden with a stunning outdoor space and private pool. Alongside this is the introduction of our new restaurant Coccu.

Telescopes Beachfront infinity pool Surf Resort is strategically located, you can see more than 7 waves from here. Our amazing bay holds three breaks, but we also have a fleet of boats to move our guests to the best bet every single day.

Waves are mostly in the two to six-foot range depending on the wave spot all year long . Between April and October, the islands receive constant swells. Shoulder season months generally have smaller swells but are also less crowded.

World-class surfing points like Telescopes, Iceland, Scarecrows and other 10 surf spots are in 20-minute range boat area. One of the famous spots that you can easily get from the resort is Telescope, it takes less than 10 minutes to get there by our private speedboat. Its one of the best waves in Mentawai, friendly and perfect for turns or to try safe barrels. There are a lot of wave spot choices for surfers, from beginners to pro surfers.

Right in the front of the Resort

It’s one of the most consistent right-handers in the region and works on all tides. This is a break that only needs a little swell to start working, and is usually surfed in smaller conditions since the reef is only vaguely defined, meaning the wave can lack shape.

When the swell is small, there are fun lefts and rights suitable for all abilities and working on all tides. This spot picks up more swell than anywhere else, and alongside Ombak Tidur is the most consistent wave in the area. Depending on the direction, it can handle swells of up to 10ft and provide the setting for some spectacular sessions. When the swell reaches 4ft and upwards, however, Iceland turns into a barrelling left-hander with several sections.

Due to its position to the north of the island, it needs a powerful swell to start breaking. Located on the other side of the island, this long left-hander guarantees a good time for surfers of all levels.

After a barrel section on the outside there are some great opportunities for manoeuvres; intermediates can practise their turns, while more experienced surfers can take advantage of the numerous ramps on offer all along the wave. One of the funniest waves in the Mentawai.

Best at mid-tide, it can work practically the whole way through the tide depending on the swell. This left-hander, which requires a fair bit of swell to start breaking, serves up a barrel on the take-off immediately followed by a turn section — you’ll need to be on your game in order to really make the most of it.

Conditions are rarely optimum for this spot, but when the wind and swell directions cooperate you might luck into one of the best sessions of your life here. Its name is a reference to the shallow and dangerous reef to which prospective surfers risk exposing themselves — hundreds of yards of razor-sharp live coral, along which an extremely fast and deep barrel breaks into inches of water.

The flat and even bottom makes it a relatively safe surf break. One of the best waves in the world. It doesn’t take much swell for it to start breaking, generating a long, peeling wave that extends for over 100 metres and can happily accommodate most ability levels. When the swell exceeds 3ft, barrels alternate with less hollow sections, allowing you to get several turns in; on smaller swells, it’s just a supremely fun wave.

This wave, located in front of an island called Pittojat, is the longest in the area, offering surfers rides of up to 300m in length. It’s perhaps not the most perfect wave in the Mentawai, but it’s still one of the best spots to lay into some turns and tuck into a few barrels.

A perfect little left-hander for those days with slightly less swell. A playful sort of wave, sometimes it serves up cheeky barrels, sometimes it’s all about the turns — it all depends on the swell direction. Offshore in southeasterly winds, it’s a great option to keep in mind whenever conditions are favourable.

Telescopes Beachfront infinity pool Surf Resort is 10 minutes by boat from the famous Telescopes Surf Break, located only less than 10 minutes away from the main port of Mentawai on the small tropical island of Awera.

This tropical island surrounded by luxurious coral clusters and also surrounded by white sand, turquoise water makes this island look attractive and comfortable to stay. The Island is well connected with the Sumatran mainland by regular ferry services.

1. Arrival at Padang Airport. There is only one point of entry to get to the Mentawai Islands: Padang City airport.

2. Fast Ferry from Padang to the Mentawai Islands ( TUA PEJAT). The ferry departs at 7am on Wednesdays, Fridays and Sundays, and at 6am on Mondays. We always advise our guests to arrive in Padang at least one day before the ferry departs.

3. Transfer from Tua Pejat to the Resort. Once in Tua Pejat, guests will be picked up by our staff and taken by speedboat to the Resort, which is a ten-minute crossing away.

Designed for intermediate/advanced surfers this includes all boat trips to the surf. (We usually go out 3x per day and we always try to find the best spot regarding the forecast and surfing level of the group)inc mandatory Mentawai surf tax.

Kids 12yrs and under surf for free.

$250 per person for a return journey

In order to ease your arrival to and from the resort we will take care of everything starting with picking you up at Padang, the closest airport to the resort.

*The ferry is the only way to access our resort and it only works once a day (each way) 7am Mondays, Wednesdays, Fridays & 10am Sundays. These are our only check-in and check-out dates. With the early start this is why we include the hotel on the transfer service.
(The return ferry from Tua Pejat departs 15:00 arriving in Padang 18:30)