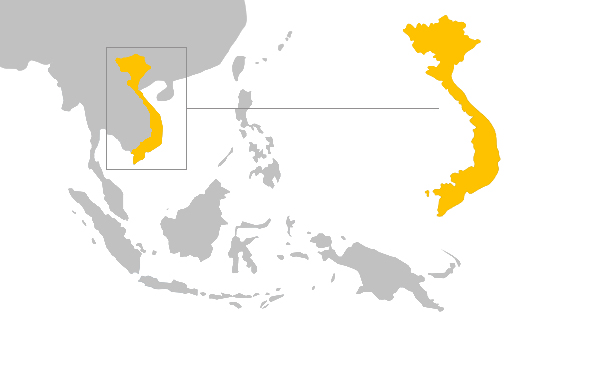 Vietnam is located in the southeast of Asia and it’s known for the delicious food, paradisiac beaches, beautiful rivers, Buddhist pagodas and exciting cities. If you’ve seen the famous movie from Francis Ford Copolla, Apocalypse Now, you know that there are good waves in the country and it's a fact that US soldiers have been surfing since the 60s, during the war. Although surfing in Vietnam is quite underrated and relatively new, the country offers everything that can make it a great surf destination. There are uncrowded line ups, hot weather all year round, breathtaking landscapes, super friendly locals and exotic food. Even though the 3,000 km vietnamese coast misses out on the Pacific groundswells, you can still find waves to surf almost all year round. The most popular area to surf in the country is along the South Central Coast. Vietnam’s waves are mainly influenced by the monsoons that create storms and winds that generate the swells. The best time to surf is between November and March during the winter monsoon season. The best swells are produced by typhoons that happen during this period of the year. Surfing in Vietnam offers the adventurous traveler the opportunity to interact with nature and have an off the beaten path surfing experience without the annoying crowds and beaches. Sounds like a dream, right?

The climate in Vietnam varies along the country. It’s subtropical in the north and tropical in the center and south. The weather is heavily  influenced by the monsoons. From May to October the country experiences a south-west monsoon that brings heavy rain mostly to the north and south parts of the country. The central part of Vietnam is protected by the mountains and has less rain leaving more space for sun shining days. From October to April the northeast monsoon occurs.  This period of the year is generally drier, but it also brings heavy rains in the early months of October to December. The best time to surf is during the winter monsoon from November to March. The water is warm year round.

There are a couple places where you can rent gear. Boards start at $5 USD and hour.

Viettel is a good choice. SIM cards should be purchased from official stores.

Local transport in Vietnam is diverse. The most common way to get around is by motorbike taxis known as xe om. When haggling your fare, ensure you know which currency you are dealing in.

Taxis are common on the streets of all major cities. The vast majority are metered (with prices in dong) and fares are not expensive.

Most travellers use buses to get around Vietnam for long distances. Buses are mostly made up of privately operated services, usually referred to as “open-tour” buses.

Renting a car is not yet an option for tourists. However, it’s easy to hire a driver at around $50 USD a day.

Motorbike rental is possible in most towns and cities regularly frequented by tourists, $7 USD a day.

Vietnamese is the official language. You’ll find English speakers in the tourist areas.

The currency is the Dong (d).

The best time to surf is between November and March during the winter monsoon season.