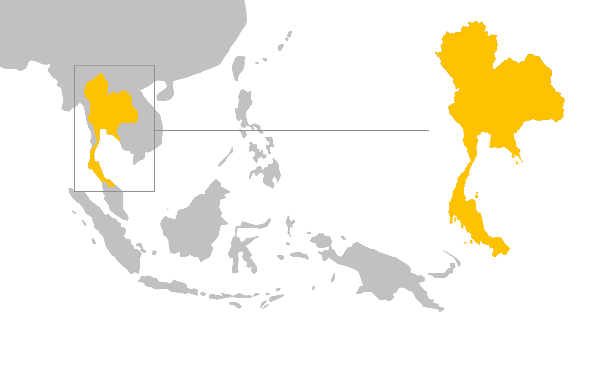 Thailand is a southeast asian country known for tropical beaches, luxurious royal palaces, ancient ruins and buddist temples. The country doesn’t have the amount of world class waves like the nearby neighbors but if you are looking for beginner friendly waves, easy going beach breaks and uncrowded surfing spots, you will definitely have lots of fun there. There are many surf spots scattered all over the coast of Thailand. You can find nice places to surf along the Andaman side on the southeast coast and also some good but less consistent surf spots in the Gulf of Thailand. Phuket is a trendy touristic destination and it’s considered as the main hub for surfing in the country. The long westerly facing coastline of the island has lots of beautiful beaches that provide reliable waves, especially from April to October when swells from the southern monsoons reach this side of the country. Thailand may not be the best surf destination in the world but the people, food and beauty of the country definitely makes up for it.

The climate of Thailand is considered mostly tropical, but can vary due to the large size of the country. Along the coast the weather is constantly hot with year round warm temperatures. In the southern peninsular region, where the best surf beaches are found, the rainy season has a different pattern than in the continent. Along the west coast, overlooking the Indian Ocean, the summer is very humid, since the monsoon hits the coast directly from the sea, while there's almost no rain from December to March. The best time to surf on this side of the country is from April to November when the biggest swells of the year usually reach the coast. Along the east coast, bathed by the Gulf of Thailand the summer monsoon is not so intense since this is the high tourist season in this area. The heavy rains occur from October to December during what is called a retreating monsoon. The best time to surf on the east coast is from November to February although this side has smaller waves and lacks the consistency of the Indian Ocean.

There are a handful of places where you can rent gear. A board starts at $6 USD for an hour.

AIS is a good choice. SIM cards can be purchased from the kiosk at the airport, convenience stores or official retail shops.

In Bangkok, Khorat, Ubon Ratchathani and Phitsanulok there are local bus networks.

Within medium-sized and large towns, the main transport role is often played by songthaews (“two rows” facing each other).

Taxis come in many forms and in bigger towns you can often choose between taking a tuk-tuk, a samlor or a motorbike taxi. Regardless of form, you should establish the fare beforehand.

Regular ferries connect all major islands with the mainland

Citizens from 64 countries, including EU, US, and Australia, can enter Thailand without a visa for 30-90 days depending on which country you’re from.

The official language is Thai. You’ll find many that can speak English, especially in the more touristy areas.

The currency is Thai baht (B).

West side: April to November.

East side: November to February