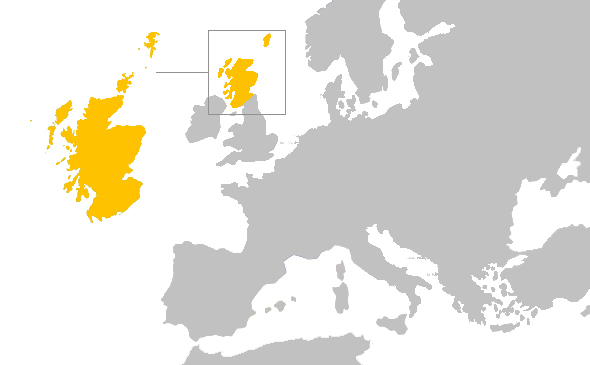 When you think about making a surf trip to Europe, Scotland is probably not on top of your list but it should be. The country has golden sandy beaches, a long and exposed coastline and beautiful colored water ranging from deep blue to green emerald. Surrounded by the powerful North Atlantic and north swells, Scotland ensures constant epic uncrowded waves for those who are willing to endure the cold water conditions. The surfing reputation of the country is growing and every year Scotland is a stop on the renowned O’Neill ColdWater Classic series. The contest happens in the small town of Thurso that is considered the national surfing capital. The northerly tip of the country has the best and most consistent surf breaks. The prime surf season happens in autumn and winter. During this time of the year the water temperatures can be really cold so don’t forget to bring the right gear with you. Water temperatures can be around 13°C  so you will need a nice 5/4 wetsuit with you plus neoprene booties, gloves and hood. Summer also provides good surf conditions with warmer water. During spring and summer a 3/2 wetsuit is enough. Don’t let the harsh and cold surfing conditions scare you from visiting this remarkable country. Scotland has amazing scenery all over and after every surf session you can have a shot of the famous scotish whisky to warm you up and celebrate another epic surf session.

The climate in Scotland is influenced by the Atlantic Ocean, it’s temperate and humid, with relatively small temperature variations between winter and summer. The west coast and the northern areas of Scotland are usually more rainy because of the northwest winds that bring cool moist air down from the North Atlantic while the warmer, sunnier areas are most often found on the south and in the southeast.

Winter (December to February) and Autumn (September to November) are usually the wettest seasons, the weather can be unpredictable and change from day to day or even on the same day. During summer the temperatures can be pleasant with average temperatures ranging from 18-23°C. Between May and September the weather really warms up and temperatures can reach up to 30°C. The surf high season goes from September to May. The best surf can be found during autumn and winter months but be aware that the water is cold all year, so make sure you pack your wetsuit!

The best surf spots in Scotland are located on the north coast. Thurso is the national surf capital and hosts most of the world class waves of the country. Back in the days this small town was known for their agriculture and for having a nuclear power plant but now is famous for the best high-hander wave in Europe. Situated in the north of the country, Thurso is exposed to every swell that comes across the North Atlantic. Waves can range from 2 to 15 ft making the low temperatures of the Baltic Sea totally worth it.

Tiree is the most westerly island of the Inner Herbrides and it’s known for being extremely beautiful. Sparkling white sand beaches stretch along the coast contrasting with the emerald color sea. This island is also known for being one of the sunniest places in the UK. With good wind conditions and a favourable position to receive swells this place is also known as the “Hawaii of the North”.

Machrihanish is one of the least known surf spots in the country. This village has a good surf spot breaking in front of a rivermouth. Another good surf spot in the area is West Port Sandbar although it can be a bit tidal dependent.

Pease Bay is a fun surfing spot located in the southeast coast, close to Edinburgh. The area is known for having some reef breaks for advanced surfers and quality beach breaks suited for all skill levels.

With hypnotic blue waters and stunning white sand beaches the Isle of Lewis is considered a surf sanctuary. Consistent swells make this a perfect setup for a surf trip. Dalmore is the most famous surf spot in the area and can get really good but also a bit treacherous. When conditions are tricky leave it for more experienced surfers.

Belhaven Bay is located near Dunbar and has a good surf spot for beginners. The beach is flat with shallow water and doesn’t offer any obvious hazards.

Fish and chips cost $5-9 USD. Midrange meals in pubs or restaurants range from $15-35 USD. Dining & drinking at high-end restaurants can cost anywhere from around $60-100 USD.

There are a handful of shops where you can rent gear. Boards can be rented from $18 USD a day..

EE is the UK’s largest operator and a good choice. Prepaid packages cost anywhere from $12-30 USD for 1-4GB. You can purchase a SIM card from stores, supermarkets, kiosks, drug stores and official outlets, as well as all international airports.

Scotland is connected by an extensive road and rail transport network, with a variety of options available for getting around.

Public transport provides trains and bus services to Scottish towns and cities as well as many villages and ferry ports.

One of the best ways to get around Scotland quickly and cheaply is by train.

You can find car rentals starting at $16 USD a day.

You can run into some localism on certain waves and the beaches near Edinburgh get very busy. The biggest danger is surfing alone at deserted beaches.

If you are an EU, UK, or Irish citizen you can freely enter. Citizens from 56 countries, including the US, Australia and Canada are visa exempt, allowing you to stay for up to 6 months. You should check the most current policies, as the UK is still implementing new laws since leaving the EU.

Typically the best time for surfing in Scotland is during the autumn and winter months but be aware that the water is cold all year, so make sure you pack your wetsuit!.