Surfing in Republic of Congo 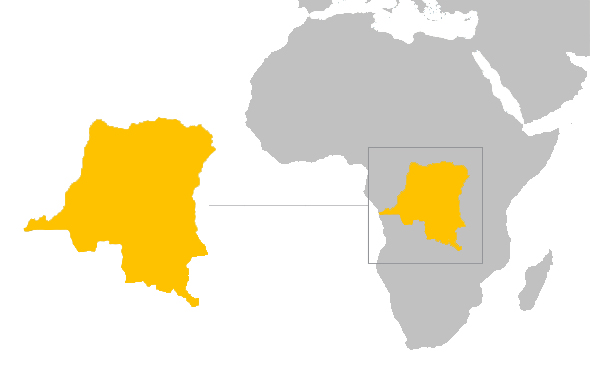 Congo is located in the central west coast of Africa and it’s known for the breathtaking landscapes and beautiful rainforests.The country is home for abundant wildlife and has half of the population of all the mountain gorillas in the world. After a few years of civil war, Congo seems to have settled down and although there is still some tension in some areas, the country is considered a safe place to be visited now. There is 170 km of sandy coastline, only interrupted by a few rivermouths and some points. There are waves all year round in Congo and the best surfing area is around Pointe Noire, which is an important port city and the main oil industry hub in the country. Most of the waves are heavy beach breaks but there are also point breaks and mellow friendly waves perfect for beginners and longboarders. The prevailing winds are from the southwest and they usually kick in around mid morning. These winds are more common from June to October, but the rest of the year experience glassy days more oftenly. Pointe Noire is considered one of the calmest and safest places in the entire country and is also known for having beautiful beaches, dense rainforest and stunning red cliffs. Just up north of the city is the Conkouati-Douli National Park where one can see all kinds of terrains and animals that inhabit these lands. Most of the surfers in the country are french expats so crowds are not a problem yet. Despite the confusing and limited infrastructural system of the country, Congo still provides an amazing playground for ocean-lovers and wildlife alike. It’s a perfect destination for boldly adventurous surfers who will be rewarded with fun waves and some quality relaxing time in an unique african country.

The Republic of Congo climate is equatorial with hot and humid weather all year round. There is no real dry season in the north, while the south, the center and especially the coastline experiences a dry and cooler season during winter that happens from June to September. The best time to surf in the Republic of Congo is from May to August. During this time of the year the winds are predominantly from SE (Offshore) and swells are more consistent. The water temperatures are mostly warm allowing surfers to use only board shorts almost all year except late summer when temperatures drop to 20°C from July to August.

The best and most well known surf spots in the Republic of Congo are located around the port city of Pointe Noire. Here are the list of registered spots in the country: Côte Sauvage, Matombi, Djeno Point, La Plage Sportive, La Pyramide, M’vassa, Mukiwa Beach, Piege a Sable, Plage Mondaine, Songolo and Pointe Kunda.

Airtel is a good choice. SIM cards can be purchased from shops, kiosks and retailers.

There are not many options for public transportation.

The majority of public transport in Congo is in the form of bush taxis and lorries. Bush taxis are a little faster, but far less comfortable for long distances. For cross-country travels you can go to Brazzaville's Marché Total to haggle with truck drivers parked on Ave Matsoua.

Trains run between Brazzaville and Pointe-Noire three times a week in each direction.

Renting a car is pretty expensive at around $87 USD a day. You are probably better off hiring a driver to get around.

Often onshore, rocks. Difficult to get around.

French is the official language. You will not find many English speakers.