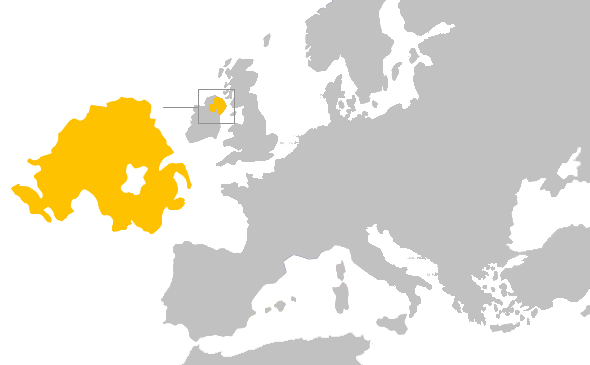 Northern Ireland doesn’t have as many surf breaks as its southern neighbor but still has a few good options for beginners and advanced surfers. The country has miles of unspoiled and uncrowded beach and if you are lucky you can score a world class wave all to yourself due to the fact that there aren’t many surfers on this part of the island. The best surf spots are found on the more exposed north coast so there is where you will find some surf schools offering lessons and surfboards for rent. The best time to surf is in autumn and winter but be prepared for the cold water. Make sure you find a good 5/4 wetsuit, some booties, gloves and a hood if you are coming during this time of the year. If you are coming during the summer a 3/2 wetsuit should be enough. Besides surfing, Northern Ireland has the amazing Causeway Coastal Route that will take your breath away several times. The country is also famous for having many locations where the famous HBO series “Game of Thrones” was shot. Last but not least, every village in Northern Ireland has a traditional Irish pub serving good beer, good whisky and a nice fire to warm you up on a rainy afternoon.

The climate in Northern Ireland is temperate maritime but heavily influenced by the North Atlantic Current so there aren't extreme temperature variations. The country has mild winters, cool summers and frequent rainfall. The best surf spots are located in the more exposed north coast but there are still some less consistent breaks down the east coast as well. The best time to surf is during the autumn and winter. This is when the North Atlantic Ocean is more active unleashing a massive amount of swells to the northern Irish coast. If you come at this time of the year be prepared for the cold water. The average water temperature during this time of the year is 13°C (55°F) which means you will need a 5/4 wetsuit plus gloves, booties and a hood. During summer and early autumn a 3/2 should be enough.

Benone Strand in County Londonderry is a great location for surf beginners. This long stretch of beach has seven miles and there are multiple peaks to choose from.

The beach is back-dropped by waterfalls on the cliffs of Benevenagh.

Just beyond Benone Strand is Castlerock. This gorgeous beach is better suited to advanced surfers. There is a good right-hand wave that breaks off the pier. East Strand is probably the best choice for beginners. The waves are usually small there due to being by the headland. East Strand is also protected from strong north west wind, so it’s a good option on windy days. Portstewart is another good option for those who are still learning how to surf. It's a bit more exposed to westerly winds. The east corner of the beach can be nice on bigger days. Portballintrae is an expert only kind of break. There is a beach break, a river mouth and a rocky reef all at the same beach. This is considered the best surf spot on the north coast. Finn MacCool’s is a big wave spot that has a submerged rocky slab that only breaks with a solid swell. Waves can get up to 30 ft and the bay offers a good view of the break for those who just want to watch.

A cheap meal at a cafe or pub will cost around $9-14 USD. Midrange meals in restaurants range from $17-32 USD. Dining & drinking at high-end restaurants can cost anywhere from around $50-100 USD.

There are a handful of shops where you can rent gear. Prices vary depending on where you're surfing and what you need. Boards with wetsuits can be from $25-80 USD for a day to a week.

You can purchase a SIM card from any official phone shop.

Translink connects Belfast to various cities and towns in Northern Ireland. The bus network is pretty comprehensive. However renting a car is perhaps the easiest way to see the rural and remote areas. You can find car rentals starting at $20 USD a day.

If you’re in major cities you’ll find plenty of buses or taxis to help you get around.

If you are an EU, Irish citizen or British citizen you can freely enter. Citizens from 56 countries, including the US, Australia and Canada are visa exempt, allowing you to stay for up to 3 months.

Although it's not mandatory, it’s recommended that you have been vaccinated for hepatitis A & B, rabies, meningitis, polio, Tdap, chickenpox, shingles, pneumonia, influenza, measles, mumps and rubella.

The currency is Pound Sterling (£), also known as the Pound