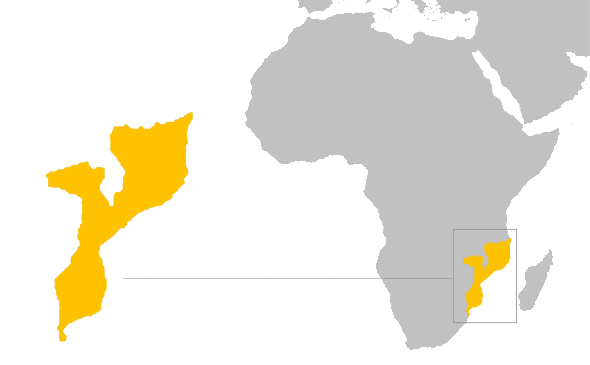 Mozambique is a southern African country located in between South Africa and Tanzania. It lays in the Indian Ocean so the water is warm the whole year. It has a pretty long coastline, but because the north is blocked by the Island of Madagascar the south coast gets most of the swell and that's where you'll find the best surf spots. Surfing is not a very popular activity in Mozambique so don’t expect to see many surfers in the water especially in the most remote spots. Besides surfing Mozambique has stunning nature and many national parks to be seen. National Heritage Game Parks in Kwazulu-Natal is one of the most beautiful parks in the country and it's definitely worth a visit.

Mozambique has a tropical to subtropical climate. Most of the country has the same weather pattern as the rest of the southern African countries with rains falling mostly from December to March. Around April the rain gives space to the sun and the humidity starts to drop. Dry season is from June to October. This is the best time to visit the country due to the many beautiful sunshine days and very little rain. Mozambique surf season goes from April until August but the best months are usually June and July. There is plenty of swell throughout the year but during these two months the winds are most favourable coming from land or sometimes no wind at all. The main swells come from the S and SE. Most of the swell coming from E is blocked by the island of Madagascar.

The best and most consistent surf spots in Mozambique are in the south. This is because most of the north coast is protected by the Island of Madagascar. Here are the best registered surf spots of Mozambique.

Barra Beach: you will find this surf spot at the end of the san pit of the beach. It’s usually offshore because the beach is facing NNE.

Guinjala Bay: this break is located at the east coast of Guinjala Bay 20 km south of Inhambane close to Praia Jangamo.

Tofinho: this is a point break situated at the southern end of Praia Tofo. Avoid to surf at the point in the beginning of the bay because there are too many rocks.

Ponta d’Ouro:  this is probably the most famous surf spot in Mozambique. It’s a point break located 150 km south of the capital, Maputo, close to the South African border. It’s a very consistent break that produces long world class waves. Avoid getting there on low tide since it works much better with more water.

A local-style meal will cost around $5 USD. Midrange meals in restaurants are $11 USD. Dining & drinking at high-end restaurants can cost anywhere from $15-30 USD.

There are a few rental shops dotted around the main surf locations. Board rentals are around $6 USD for an hour to $24 USD for the day

There are two major companies Vodacom and Movitel. Vodacom has better quality in the cities, Movitel has the widest network in more remote places. Packages range from 20MB to 2.5GB for $1-4 USD. You can find a SIM card at shops, supermarkets, kiosks, drug stores and official outlets, as well as at Maputo International Airport.

One of the cheapest ways to get around Mozambique is via Chapas. The name given to any public transport that runs within a town or between towns. Chapas can be hailed anywhere, and prices are fixed. Intra-city fares average $0.70-0.10 USD.

You can find taxis at the airport but they do not cruise for business, so you’ll need to seek them out. Only some have functioning meters, you’ll usually need to negotiate a price. Town trips start at $2.24 USD..

Renting a car can be expensive in Mozambique, at $60-70 USD a day. If you’re in South Africa first it is advisable to rent a car (preferably 4×4) there, where it is cheaper and more accessible.

The reef is sharp and many paid with their own skin after a bad timed rock jump. There are sharks, although they’re usually small.

Malaria is a serious problem. Cyclones are common during the wet season.

Citizens of all countries can obtain a visa on arrival at all borders if they can prove they are traveling for leisure purposes. You might need to show proof of return ticket and accommodation confirmation. The visa is valid for 30 days. Your passport needs to be valid for at least 6 months at time of entry.

The only official language of Mozambique is Portuguese, which is spoken mostly as a second language by about half the population. Common native languages include Makhuwa, Sena, and Swahili. English is spoken primarily in tourist areas and is more prevalent in the south due to the South African tourists.

The best time for surfing is early winter from April to August, when low tides occur in the morning. Heavy rains come between December to April and travel during this period may be difficult.

Check out pictures of the surf in Mozambique at #surfmozambique.