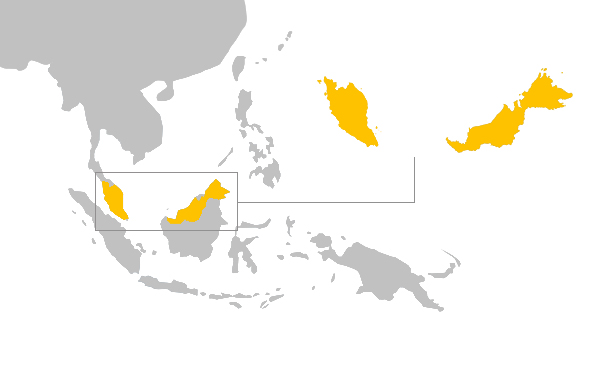 Malaysia is a Southeast Asian country located on the Malay Peninsula and in the island of Borneo. The country is known for being a food heaven and having white sandy beaches, green lush rainforests and a mix of cultures and races living in peace and harmony. The capital, Kuala Lumpur, is home to the iconic 451m-tall Petronas Twin Towers and busy shopping districts. What most visitors don’t know is the potential of the malaysian waves. Malaysia’s surf community is still under development as the activity has only started to become popular over the past 10 years. The best waves are located in the east coast and Cherating is where surfing started to be practiced in the country. The resort town on the east coast of Malaysia is visited by many tourists who come from all over the world, especially Europe, to either surf or learn how to surf in the warm water and friendly waves of Cherating. The best time to surf on the east coast is during the northeast monsoon season that goes from October to March. On the west coast away from the monsoon, the best surf season is from April to October. Malaysia might not be a surf heaven like the neighboring countries but there are a large number of uncrowded prime surf spots that can entertain any surfer of any level. The local surf community welcomes any visitors with arms wide open to share and enjoy the waves of this incredible country.

The climate in Malaysia is equatorial with hot and humid weather patterns throughout the year and little variation in the temperature. There is plenty of rainfall during the whole year caused by the monsoons. Precipitations are more frequent in the areas directly exposed to the monsoon winds creating slightly different patterns. From mid-October to January, the northeast monsoon prevails, affecting especially the east coast of the country and the north-east coast of Borneo. Between June and September, it's the period of the southwest monsoon, which  usually produces weaker effects. Rains occur mainly in the form of intense downpours or thunderstorms, usually in the afternoon, so there's no shortage of sunshine during the day. The surf season on the East Coast usually goes from October to March. During this time of the year the beaches on the East Coast are affected by relentless rain, strong winds and big waves, which means good surf. On the west coast away from the monsoon, the surf season goes from April to October.

The coastal areas on the East Coast of Malaysia have some pretty good shore-break and beach-break. Cherating has by far the most popular places to surf in Malaysia. Here are some famous surf spots in the country:  Juara Beach, Desaru and Tanjung Resang, Pantai Batu Burok, Kijal, Pantai Cenang and Pantai Tengah. There are also the artificial waves at Sunway Lagoon. It’s a bit expensive, but it’s a good option for those who are stuck in KL. These are also secret spots scattered around the coast. If you try to have a chat with the local surfer dudes they might share them with you.

There are a couple places where you can rent gear. Boards start at $5 USD and hour.

Maxis is a good choice. SIM cards can be purchased from airports, shops, malls and kiosks.

Public transport in Malaysia is reliable and inexpensive. There are Local bus networks in most Malaysian cities and towns.

Taxis are metered in KL and some other large cities, though Malaysian drivers often prefer to turn off the meter illegally, and negotiate a fare.

Grab, ride-sharing service, operates in all the major cities and towns.

You can hire a driver for around $7 USD an hour.

Car rentals prices are around $28 USD a day.

Scooter rental is around $5 USD a day.

Citizens from 63 countries, including EU, US, and Australia, can enter Malaysia without a visa for up to 90 days.

Malay is the official language. English is pretty common.

The currency is Malaysian ringgit (RM).