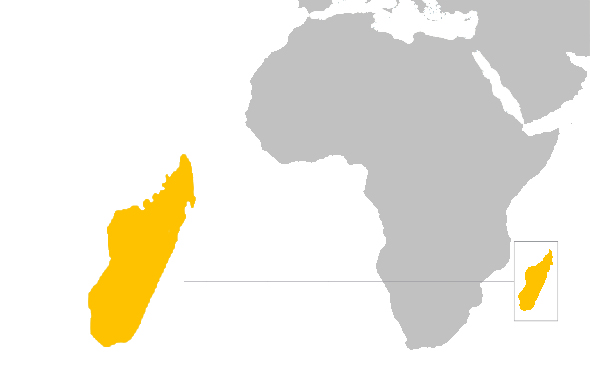 Madagascar is the fourth biggest island in the world located in the eastern edge of South Africa, which means that there is plenty of coastline to be explored. The island receives lots of swell that comes up from the Indian Ocean making it a solid surf destination for those who seek adventure and uncrowded waves. Surfing hasn’t really taken off in Madagascar yet so most of the time you will be surfing alone or with your travel friends and if you are adventurous enough you will probably be the first one surfing one of the many virgin waves of the island that are just waiting to be discovered. Besides surfing, Madagascar offers stunning scenery and unique biodiversity, with many species that are only found on the island.

Madagascar has a tropical climate with two distinct seasons. Wet season is from November to March but this doesn’t affect most of the southwest of the island that has an arid climate. Dry season is from April to October except on the east coast that experiences rainfalls all year round. As in most of the monsoon countries the rainfall happens in the afternoons which means that even in the wettest months there is still plenty of sun during the mornings.

The optimal time to make a surf trip to Madagascar is from March to September when the south part of the island gets most of its swell from low-pressure systems that move up from the South Atlantic. There are still waves at other times of the year from swells that are generated from tropical cyclones.

There are areas of the island where a few surf spots have been mapped. This doesn’t mean that there are no other surf spots to be discovered around the coast. The southwest part of the island is considered the best place to surf in Madagascar. There you will find many high quality surf spots, many of them breaking in the offshore coral reef, that means you will need a boat to explore these breaks.

Ankaninoof: this spot is only accessible by boat from Tamatave, and it's only recommended for experienced surfers. There are lefts and rights and the waves are powerful and consistent. Watch out for sharks.

Corre: this break is suitable for all levels of surfers. The access is via Tamatave on the west coast, which is located south of Toamasina.

Flame balls: this is a world-class wave that is recommended for experienced surfers. It’s located in the Anakao area and can only be accessed by boat. Be extra careful with rips and sharks.

Simple meals at hotely (local restaurants) cost around $3-5 USD. Midrange meals in a good restaurant range from $7-12 USD with beers. Dining & drinking at high-end restaurants can cost anywhere from $15-30 USD.

Bring everything with you; boards, wax, ding repair kit, spare fins and leash. Do not rely on finding surf shops in Madagascar.

Orange, Telma, and Airtel all sell SIM cards for anywhere from $1 USD to 40 USD depending on the data package and length of time you will be using. SIM cards can be purchased on arrival at the airport.

Traveling around Madagascar takes time and is very slow even by African standards. While flying domestic inside Madagascar used to be ridiculously expensive, the good news is there is now a new local budget airline called Tsaradia. The usual way to get around Madagascar is by taxi-brousse, which are usually old Mercedes minibuses that can never be too crowded. But Cotisse Transport a newer local-transport company that leaves on time and even offers wifi onboard and only one person to each seat instead of 3 as on a normal taxi-brousse.

Maybe because of the renowned sharky surf spots, Madagascar has not yet to reach its potential as a world class surf country. So do be aware of sharks wherever you go surfing here.

Cyclone season runs from December to March. The east coast is the most affected but cyclones can also hit the west coast. Heed local warnings and seek advice at the time for transport and activities.

Visas are required for everyone visiting Madagascar. You can obtain a 30, 60 or 90-day visa at all international airports and they range from $37-55 USD depending on how long you stay. You can also apply for a visa in advance either at an embassy or online. If you plan to purchase your visa on arrival fees are only payable in cash and there is no ATM or money exchange before immigration. The visa sticker takes one full page in your passport.

A yellow fever vaccination certificate is required for travellers arriving from countries with risk of yellow fever. Although it's not mandatory, you might opt to get routine vaccines such as hepatitis A, hepatitis B, typhoid, rabies, polio, tetanus, tuberculosis measles, mumps and rubella.

The main language in Madagascar is Malagasy. Outside the big cities very few people speak English. However, the locals are always very helpful and eager to help out even when they cannot speak the same language. The local currency of Madagascar is called Malagasy Ariary (MGA), commonly shortened to Ariary.

The best time to surf in Madagascar  is from March to September when the south part of the island gets most of its swell from low-pressure systems that move up from the South Atlantic. There are still waves at other times of the year from swells that are generated from tropical cyclones.

Check out pictures of the surf in Madagascar at #surfingmadagascar