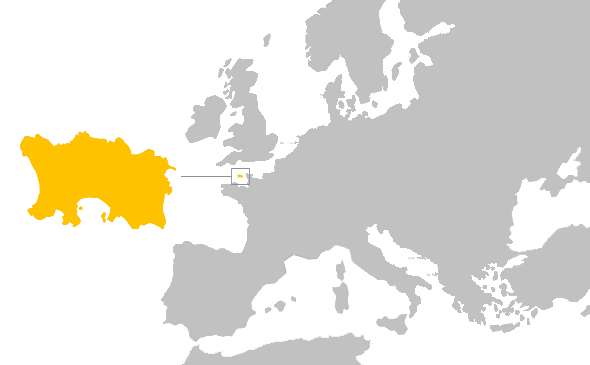 Jersey is the biggest island in the Channel Island and is known for its beautiful scenery and for having some of the best waves in the UK. The island has a long time surfing reputation and it's where the fist surf club in Europe was founded in 1923. Jersey features good surfing conditions, produced by solid swells coming from the consistent area of the North Atlantic Ocean. The best time to surf is during the winter and autumn months. This is when the swells are bigger and more consistent. The water in the Channel Island is warmed by the gulf stream but during the peak of the winter temperatures can still get very cold so make sure you have the right gear. In winter it’s recommended to bring a 5/4 wetsuit plus booties, gloves and a hood. Summer also offers good surf conditions and a 3/2 wetsuit is enough. The best surf spot in Jersey is St. Ouen’s Bay, a 3 mile beach with lots of sand banks to be surfed. For many years this beach hosted the European longboarding championship tour and at some point it was considered the surf capital of Europe. Although surfing is a popular activity on the island there are still many places where you can surf with low or even no crowd. Summer is the peak season so expect a bit more crowd during this time of the year. But in the end it doesn’t matter if you are a winter surfer or a summer beginner, anyone can squeeze into a wetsuit, grab a surfboard and have fun at any time of the year on the picturesque island of Jersey.

Jersey has an abundance of surfing spots all over the 43 miles of coastline. The west coast is more exposed to this swells and has the best and most consistent surf spots in Jersey, but when the wind changes direction you can also find nice conditions on the other side of the island. St. Ouen’s Bay is the most famous surfing area on the island and it’s also known for having great restaurants and cafes where surfers can recharge their energies or just meet for a beer. The beach is 3 miles long with nice sand banks and has several surf breaks; secrets, The Watersplash, Le Braye, La Rocco, Petite Port and Stinky Bay. Further north you will find Grève de lecq and Plemont. St. Brelade’s Bay is located on the south coast and it’s a more sheltered option. When the storms are raging the west coast this is the place to paddle out. In the summer this beach gets busy with tourists attracted by its beauty but during the stormy winter days you can score some good surf with low crowds.

A simple meal will cost around $9-12 USD. Midrange meals are from $15-30 USD. Dining & drinking at high-end restaurants can cost anywhere from around $65-95 USD.

Sure is the leading operator on the Channel Islands. SIM cards can be purchased at retail outlets. Prepaid packages start at just $10 USD.

Jersey’s small on size, making it easy to explore the cliff top panoramas and cycle routes that hug the coast. There is a comprehensive network of public transport to help you get around.

You can find car rentals starting at $34 USD a day.