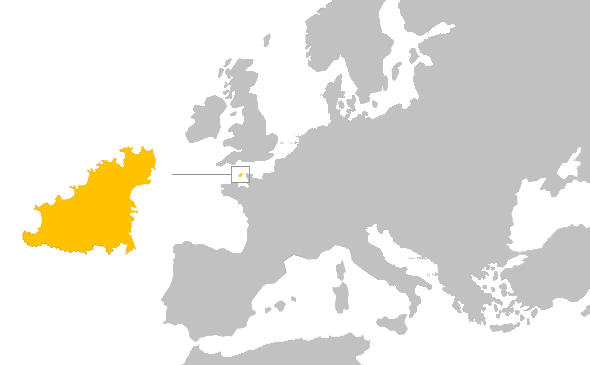 Guernsey it's a little island located in the Channel Islands that hasn’t yet shown the world its surf potential. Usually shadowed by its neighbors' surf tradition but slowly “The Rock”, as it’s called by the locals, is making a name for itself among the surf community. Measuring only 25 square meters this island has some nice reef and boulder waves suitable for expert surfers but also has many beach breaks scattered around the coast that can please the beginners. The island has 27 beaches and lots of natural beauties. The fact that it’s pretty small makes it easier to go from one side to the other in order to make the most of the conditions of the day. The best time to surf is during the autumn and the winter. This is when the swells are more consistent but it's also when the water gets colder. The average temperatures of the ocean at this time of the year is around 13°C so make sure you have the right gear. A 5/4 wetsuit, booties, gloves and a hood are highly recommended. Summer also produces some good conditions and you only need a 3/2 wetsuit to surf during this time of the year. So what are you waiting for? It’s time to squeeze yourself into a wetsuit and hit the surf.

The Channel Islands have a Mediterranean climate. This means cool, wet winters and hot, dry summers. On the Channel Islands the climate is very influenced by the ocean. That makes summers milder, usually with higher humidity, and more nocturnal fog in comparison with the mainland. The coolest months are from December to March while July to October are the hottest months. The average temperatures in January range from 15°C or 59°F. Summers are  warmer with an average temperature in July of around 22°C (70°F). Because of the moist ocean air the temperatures in the Channel Islands are not too extreme but the high nighttime humidities usually causes frequent fog.

Most of the rainfall in the Channel Islands happens between November and April. With January and February being the rainiest months. The best time for surfing is during autumn and winter (September to March). This is when the Channel Island receives constant swells generated in the Atlantic North.

Guernsey has epic waves throughout the whole year, with unspoiled reefs waiting to be surfed. The best swell direction for the island is from the west.

Guernsey's most famous surfing area is Vazon, a large bay with multiple surf spots and probably where most of the locals learned how to surf. At the southern tip of Vazon you will find the island’s best high performance wave called “Centres”. This wave has two sections “Inside Centres” and “Outside Centres”. In order for this wave to break it needs a proper swell and a king tide. On a good day you can connect both sections of the wave and have fast barrels and good rippable sections.

3 miles up north from Vazon there is Portinfer. This break captures more swell than Vazon, works better from mid to low tide and it’s popular among the shortboarders.

Just south of Vazon you will find Perelle. This is one of the most famous surf spots in the island and has a big wave spot called Dom Hue.

There are a couple shops where you can rent gear from. Boards start at $20 USD.

Sure is the leading operator on the Channel Islands. Purchased at retail outlets. Prepaid packages start at just $10 USD.

Getting around is pretty easy whether by car, foot, bus or boat.

Guernsey is largely flat and a pleasure to cycle around as there are many designated cycle lanes in town and along the coast. You can rent bicycles from outlets in St Peter Port and also along Guernsey's north coast.

Guernsey is also covered with a comprehensive network of buses. A ride costs £1

You can find car rentals starting at $37 USD a day.

Check pictures of surf in Guernsey at #guernseysurf.