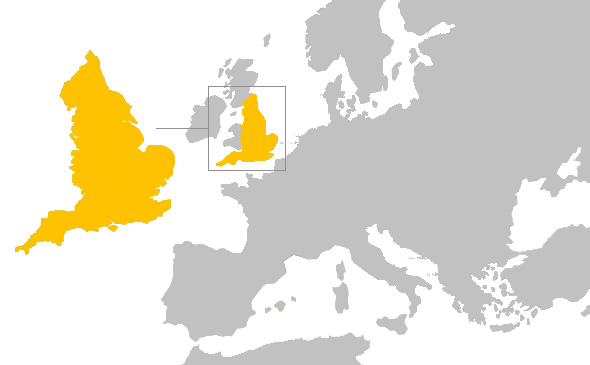 England has nearly 11 thousand miles of coastline and it's blessed with some great surf spots for those who don’t mind surfing in the cold. The island is strategically located on the North Atlantic and it’s exposed to a large amount of swell directions. The best part of surfing in England is there is no part of the island that is more than 80 miles from the ocean and the country receives swells from pretty much every single direction. When going around the coastline you will find an unbelievable varied coastline that has almost all kinds of beaches and reef formations. This means that when the storms from the North Atlantic hit the shores, it  produces a variety of waves suitable for all levels of surfers. Cornwall is the most famous and consistent surf area in the country and receives plenty of swell during the whole year. This is the number one surfing destination in the country known for pleasing both beginners and advanced surfers.

The climate in England is influenced by the Atlantic Ocean, it’s temperate and humid, with relatively small temperature variations between winter and summer. The west coast and the northern areas of England are usually more rainy because of the northwest winds that bring cool moist air down from the North Atlantic while the warmer, sunnier areas are most often found on the south and in the southeast.

Winter (December to February) and Autumn (September to November) are usually the wettest seasons and the weather can be unpredictable and change from day to day or even on the same day. During summer the temperatures can be pleasant with average temperatures ranging from 18-23°C. Between May and September the weather really warms up, particularly in London and parts of south east England where temperatures can reach up to 30°C. The surf high season goes from September to May. The best surf can be found during autumn months but be aware that the water is cold all year, so make sure you pack your wetsuit!

England has a big variety of surf spots along 11.000 kilometers of coastline and if you are not afraid of the cold water you can surf anything from peeling barrels like Porthleven; big wave surf breaks like The Cribbar and Oyster Falls or world-class beach breaks at Croyde and Little Fistral. But if you are just starting your surfing career and want something more mellow you can also find some incredible beginner beach breaks.

One of the best beginner breaks in England is Saunton. This spot has manageable walls and works with all tides. It’s considered one of the premier longboard waves in the country.

Widemouth Bay is a long beach that has become the main center for surf schools and famous among the beginner surfers in the country.

Lusty Glaze is a good option to get away from the crowded surf spots of Newquay.

Praa Sands has a long white sand beach and it’s one of the most popular beaches of the south coast. It has good and powerful waves breaking for both sides.

There are plenty of other amazing surf spots in England so you better get yourself there and start to explore.

There are plenty of shops where you can rent gear. Prices vary depending on where you're surfing and what you need. Boards can be from $12-30 USD for a day to a week and wetsuits range from $7-10 USD.

EE is the UK’s largest operator and a good choice. Prepaid packages cost anywhere from $12-30 USD for 1-4GB.

You can purchase a SIM card from stores, supermarkets, kiosks, drug stores and official outlets, as well as all international airports.

England has a vast train network. Long-distance train tickets cost: $25–80 USD. Buses and coaches are often a good alternative to trains and they are substantially less expensive.

If you’re in major cities you’ll find plenty of buses or taxis to help you get around. If you’re in London you can easily take the Tube anywhere.

All of the big cities also have Uber.

Renting a car can be pretty pricey at $40 USD a day.

If you are an EU, UK, or Irish citizen you can freely enter. Citizens from 56 countries, including the US, Australia and Canada are visa exempt, allowing you to stay for up to 6 months. You should check the most current policies, as the UK is still implementing new laws since leaving the EU.

September to May are the best times for surfing.

Check out pictures of the surf in England at #surfingengland.