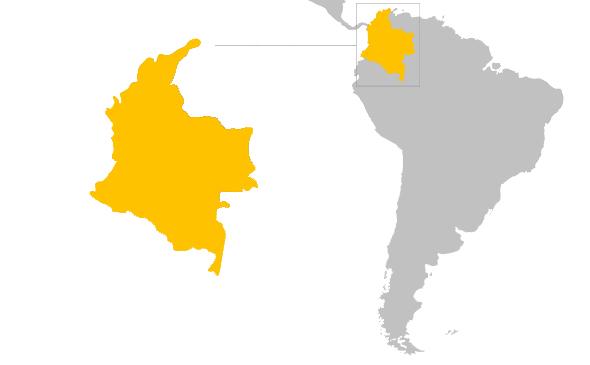 Colombia is located in the northern part of South America and it’s known for its exciting music, delicious coffee and natural beauties that includes beautiful mountains, uncharted tropical rainforests, incredible biodiversity and paradisiac beaches. It’s the fourth largest country in South America and it's the only one with both Pacific and Caribbean coastlines. With long beaches nestled up against green lush vegetation, Colombia has a numerous amount of high quality surf spots and some may say that the country is home of some hidden gems that may be the best surf spots in the continent. With warm equatorial water and consistent year round waves the country should be a major surf destination. However the recent history involving left-wing guerrilla groups, paramilitaries, and drug cartels has kept it’s surf scene under the radar of the international surf community. Lately the political situation has been stabilised and word is spreading quickly about how Colombia has amazing waves scattered all over both coasts. The Pacific side has bigger and more consistent swells, but lacks in access and infrastructure compared to the Caribbean coast. The Caribbean side is generally better suited for beginners and for those who are looking for a comfortable and worry free vacation. Bottom line is that the diversity of surf spots means that there are waves for all abilities and skill levels of surfers on both coasts which means that Colombia is gaining popularity as the last frontier of surfing in Latin American and drawing people from all over the world. One thing's for sure, these surfing gems won’t stay hidden for long.

The climate in Colombia is tropical with constant temperatures due to their proximity to the Equator Line. The country presents some climate differences depending mostly on the altitude of the area. There are small differences between seasons especially along the coast where the weather patterns are warm all year round. On the Pacific side the swells are bigger and predominantly from the South West between April and December, while in January and February they come from the North East. The Caribbean surf season goes from November to March when consistent east winds provide regular mid-period swells. The hurricane season between August and November can produce unpredictable clean groundswells which can result in top to bottom caribbean barrels. The water is warm all year round on both coasts due to the proximity of the country to the Equator line.

Finding good waves in Colombia is easy. The Pacific facing coastline offers the best waves but access can be complicated and a boat may be required to reach the breaks. From November to March the Caribbean side offers good waves with a more developed infrastructure. The best spots on the Pacific side are Juan Tornillo, Pico de Loro, El Valle, Terco, Tarmales, Juanchaco, Playa Guachalito and Cabo Corrientes.

There are many places where you can rent gear. Boards start at $4 USD for an hour.

Claro is a good choice. SIM cards can be purchased from official retailers.

Local transportation is cheap. The metro in Medellín is around $0.76 USD for a one-way ticket.

Local buses are the most common type of transportation in towns and cities.

A colectivo, shared minibus, is also a very common form of transportation.

Taxis are plentiful. While prices from the airports are regulated and non-negotiable, everything else is just a matter of your bargaining skills. Most fares shouldn’t cost you more than $6 USD.

Uber is an extremely cheap way to get around Bogotá, Cali, and Medellín. (Note: Uber is actually illegal, so don’t sit in the back seat or you might get stopped).

Rental cars start at around $80 USD a day.

Powerful waves, strong currents, rocks. Some spots are hard to get to or require a boat.

Citizens from 99 countries, including EU, US, and Australia, can enter Colombia without a visa for up to 90 days.

The official language is Spanish. In Bogota and Cartagena you’ll find some English speakers. However, apart from those cities, you’ll find very little English spoken.

The Pacific coast is best from April to October.

The Caribbean Coast is best from November to March.