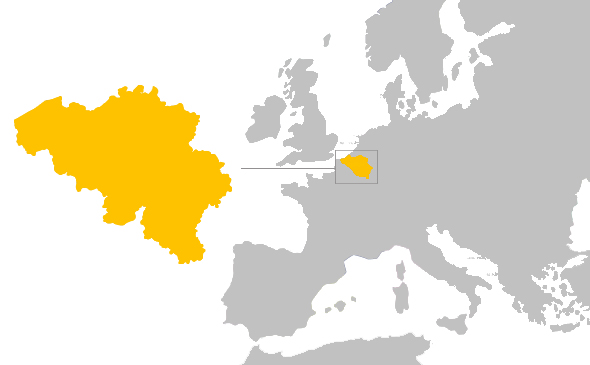 Belgium has one of the shortest coastlines in the world. Located in Western Europe, the country known for its delicious chocolate is bathed by 70 kilometers (43.5 miles) of North Sea. One third of Belgium's coastline has been artificially manipulated by men to protect citizens and properties from the power of erosion. Dunes, for example, are everywhere. Belgium has a temperate maritime climate, which means cool summers and moderate winters. The average temperature is 18°C during summer and 3°C during winter. Breakwaters, jetties and piers are the worst enemies of Belgian surfers. Although these obstacles may create quality point breaks, it is also true that they block the rare quality swells on offer in the North Sea. The North Sea can be dangerous and deadly. Its strong rips and currents add a tricky variable to the local community of surfers. The average water temperature is quite low, so a 6mm wetsuit is compulsory. In the windy Belgian environment, surfers usually have to share the line-up with fellow windsurfers and kiteboarders. The good news is that beach breaks are everywhere. You don't have to worry about rocky bottoms.

The climate of Belgium is cool and wet because it is influenced by the Atlantic Ocean, especially on the coast and the plain. In the south-eastern regions (Ardennes), which are located at higher altitudes as well as at a greater distance from the sea, the climate is more continental, and also more unstable in summer.

Precipitation is frequent, but not particularly abundant. The coastal area is less rainy, and it is also slightly sunnier than the interior: precipitation amounts to 820 millimeters (32 inches) per year in Ostend, located on the coast, to 850 mm (33.5 in) in Brussels, a hundred kilometers (60 miles) away from the coast, and to 1,100 mm (43 in) in Spa, in the Ardennes.

The best Belgian surf spots can all be visited in one morning, around Oostende. The Mariakerke, Westende, and Oostduinkerke breaks are located south, while Bredene can be surfed north of Oostende. Two spots can be discovered near the Dutch border: Blankenberge and Surfers Paradise. There aren't many surf spots in Belgium, but the entire coast is full of impressive opportunities.

There are a few surf schools in Belgium where you can rent gear from.

Proximus and Orange are a good choice. SIM cards can be purchased from kiosks, shops, the Eurostar train station, official stores. Prepaid packages start at $25 USD.

There is an extensive public transport system in Belgium made up of trains, buses, taxis and the underground.

Citizens from 62 countries, including the US, and Australia, can enter Belgium without a visa for up to 90 days.

There are three official languages Dutch, French, and German.

Autumn and spring are more pleasant, but winter is more consistent.

Dial 100 for medical and fire emergencies. And 101 for the police.