KUARE Catamaran Kite & Surf Charters Overall rating: 0 out of 5 based on 0 reviews.

As soon as you land the staff will furnish you with an unbeatable service, they will take care of everything, just sit back and relax. You will be transfered from the airport to the capital Noumea, a cosmopolitan little town with a unique blend of Melanesian and French cultures.

After a 40 minute drive you will arrive at the main marina and gateway to the worlds biggest lagoon, where the Kuare boat will be waiting to depart into the 1,60 km of unspoilt barrier reef. Kuare, a 46 feet catamaran will be all set to take you to the Southern lagoon where some of the Pacific’s most astounding scenery awaits you. On board, the hostess will help you settle into your cabins, and will be taking care of you during your cruise. Next thing you are on your way to one of the best water sports adventures of your life with just your friends or your family !!! 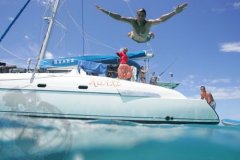 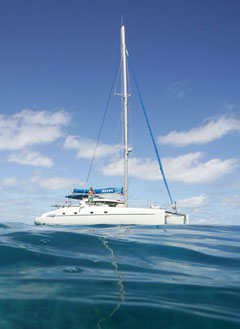 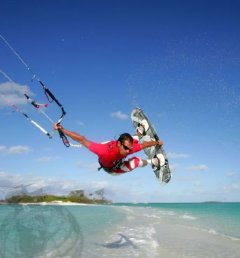 There is a Macintosh computer in the common area for multimedia purposes, so you can watch DVDs, videos and pictures of your trip, and listen to music. The catamaran is equipped with a sound system which allows you to switch on the music in either cabin, on the deck or in the common area.

THE SKIPPER (Stephane): Experienced surfer and kite surfer. Dive instructor (BEES 2) and skipper (BPPV : sailing boat skipper certificate) since 1995. He has detailed local knowledge of the lagoon for all three sports and sailing.

Stephane started surfing in Morocco, age 15, and has always had very high expectations when it comes to waves. Coming to New Caledonia he had no such expectations, but was pleasantly surprised by the quality of the reef breaks that the lagoon offers from May to Septembre.

Stephane started dive cruises in 1996 in Tahiti, and since 1998 in New Caledonia where he has decided to settle. He has specialised in isolated dives for small groups in a dozen world class sites in the south of the New Caledonian lagoon, which are easily accessed thanks to the catamaran.

Stephane discovered kite surfing a couple years ago, and has become quite passionate about this sport. He now takes groups out to the southern lagoon and shares awesome moments with them riding off coral islands with white sandy beaches.

THE HOSTESS (Sandra): The hostess will be on board to take care of all your meals, snacks, and bedding and to keep the boat clean during your cruise to guarantee the comfort level you deserve.

Stephane, your skipper and surf guide, is an experienced surfer and has good local knowledge of both the weather and the surf breaks. Depending on your surfing abilities and the weather conditions Stephane will take you to the best surf spots of the Southern Lagoon.

For surf cruises, a jet ski will be on board which is to be used as back up for big swells or to give a lift back to the peak on those really long breaks.

New Caledonia is a good surf destination all year round, however the best time of the year to surf is from May to September. It is at this time of the year that swell frequencies are the best, wind conditions optimal, and that you can score both lefts and rights.

– Relaxing on uninhabited coral islands with white sand beaches. – Snorkelling in the lagoon or on the barrier reef. – Fishing.

New Caledonian Geography and History in a Nutshell

New Caledonia is located in the South West Pacific, at approximately 1600 km off the eastern coast of Australia, just North of the Tropic of Capricorn . It constitutes the fourth largest archipelago in the South Pacific and counts a population of about 250 000 people. Almost half of the population lives in the capital city Noumea, which lies on a headland in the South-West corner of the island.

Captain Cook discovered the North-East side of the island in 1774 and named it New Caledonia because of its resemblance with the green hills of the Caledonian islands in his native Scotland. In 1853 Napoleon III annexed New Caledonia, and later included the Loyalty Islands which lie to the east of the main island.

New Caledonia became a strategic point for the allied forces during WWII as it hosts a third of the world’s known nickel resources. Nearly one million American and Anzac soldiers came through New Caledonia; roads, bridges and the airport were built and jump-started the development of the island. Some of these soldiers surfed at Bourail, where they had an R&R restaurant on the beach. They were probably the first to ever surf in New Caledonia. Consequently the first generation of local surfers emerged at Bourail in the 70’s with the fiber glass revolution.

In 1998 the Noumea Agreement was settled to prepare the progressive autonomy of the country, which could become independent after referendum in 2018. Today New Caledonia is ranked amongst the 30 richest nations in the world thanks to its mining industry and to French government support.

Language The official and administrative language in New Caledonia is French but Melanesian and Polynesian dialects are widely spoken. English is commonly used in Noumea mainly in the hospitality industry.

Safety New Caledonia is a French territory which gives it political stability and makes it safe for all travellers.

Getting There: To get there, just jump on a 2.5 hours flight from Sydney to New Caledonia.

What you should bring: Your own snorkelling gear for comfort (we do have some just in case you forget it), sunscreen, sunglasses, flip-flops or booties to walk on coral islands, wind jackets, any music or DVD you wish.

New Caledonian climate: The climate in New Caledonia is tropical. The weather is influenced by the regionally predominant southeast trade winds especially in summer, from November to March, which is also the cyclone season.

Citizens of other countries should contact the French embassy in their country of residence to enquire about visa procedures.

Vaccination No vaccination is necessary when coming to New Caledonia.

Communication New Caledonia’s mobile phone network covers all the islands and a vast majority of the lagoon. Internet cafés are easily found in Noumea but are scarce in the rest of the island. The island counts two local TV channels, 1 cable TV network, a daily newspaper and 5 radios.