Taghazout Seaview Apartments Overall rating: 5 out of 5 based on 1 reviews.

A few kilometres north of Agadir lies the atmospheric fishing village and surfers’ hideaway of Taghazout. This coastline boasts some of Morocco’s best surf spots, such as Killer Point, Anchor Point, Banana Point, Hash Point, Boilers or Mysteries. Reefs with very long right handers and excellent beach breaks for all levels, from total beginners to experts. Furthermore, as this stretch of coast is sheltered by Cap Ghir and surrounding hills, sunshine is virtually guaranteed in the region, with over 300 days of sunshine per year!

At the heart of this Surfing Mecca, Anchor Point & Taghazout Surf Apartments are nice residential complex overlooking Hash and Anchor Point famous surf spot. All apartments have a balcony with seaview. Only metres from the water!!! They is ideally located a 5-10 minute walk from the centre of Taghazout and its restaurants and supermarket. Anchor Point team will take care of everything for you; from airport transfers, to navigating the local Souks, quality surf guidance and coaching in the water, in order to make your stay fun and exciting in complete luxury and safety. 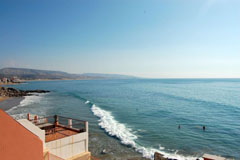 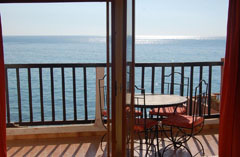 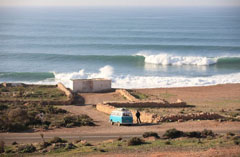 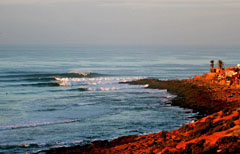 Linen and Towels: Change of linen every 3 days on request. Towels are changed every second day.

SURF SPOTS Anchor Point Surf Apartments is surrounded by some of the best surf spots in the country. Right in front lies the famous famous break of the Kingdom of Morocco, anchor Point. The wave takes its name from the “madrague” in ruin in front of the spot. The concentration of good waves on this stretch of coast has largely contributed to the reputation of Marruecos as a world class surf destination.

This stretch of coast north of Agadir enjoys consistent and world class surfing conditions from September through to April. The combination of swell generated by the North Atlantic depressions, light offshore trade winds and a variety of point, reef and beach breaks, make the region an exceptional surfing destination. Famous surf spots around Taghazout, all a short drive distance away from each other, include Banana Point, Anchor Point, Killer Point, Hash Point. Boiler and Mysteries

Morocco receives the same swells as the Atlantic coasts of Europe, but because of its more southerly location, does not suffer from the same cold winter weather. With swells ranging from 3 to 15 feet you will always find a wave to suit your level of surfing experience and ability. Those with less experience should not worry; when the points are 15 feet and grinding there’s always a sheltered spot to found. In Summer, when Taghazout surf spots are too small, there are always some waves in nearby Tamri, Imsoune or Tifnit.

SURF SCHOOL & GUIDING Learn to Surf with fully qualified surf instructors, life guards with a surf coaching degree. They will take you to the best surf spots suitable for each individual’s skills.

Discover this surfing Mecca with highly experienced guides who will take you to the best spots in the area according to swell conditions and your surfing skills, whether an intermediate or advanced surfer.

Morocco lies directly across the Strait of Gibraltar, no more than 8 miles (13 km.) from Spain and Europe. Morocco is the only African country with coastal exposure to both the Atlantic Oceanand the Mediterranean sea, although most of its 1,150 miles (1.835 km.) of coastline are on the Atlantic shore. With so much Atlantic coastline, Morocco offers the surfer a dazzling array of opportunities. Rocky bottoms alternate with sandy ones, reef breaks with beach breaks, offering a surfing alternative for all conditions, skills and levels. Surfers will find string of first class surf spots down the whole Atlantic coast, from Tangier to Agadir and beyond in the deep south. The most famous surf spots lie just north of Agadir, around the fishing village and surfer hideaway of Taghazout.

Although Americans and Australians were the surfers who brought the sport to Morocco in the 1970’s, now it is the European surfer along with his Moroccan counterpart who is indulging his passion for the wave. In the last few years, the popularity of this sport has grown rapidly on the international and Moroccan stage. Several organisations have been formed to encourage and to promote this sport. These groups have organised tournaments and contests, created surfing schools, formed ties with Europeans organisations and tried to make the country aware of the public relations and financial potentials of the sport.

Agadir/Taghazout A few kilometres north of Agadir and easily accessible by bus or taxi, lies the atmospheric fishing village and surfing Mecca of Taghazout. Even if there is always a handful of tourists around and Taghazout has become a hippy and surfer hideaway, the village still lives according to its own agenda. Yet much of the activities are related to tourism these days and there are many restaurants around playing Bob Marley all day long ! The locals still wear traditional clothes, wooden fishing boats lie on the shore, painted with colourful patterns and fishermen mend their nets on the beach. The village displays an array of narrow streets line by cubic white houses with doors of many colours and intricate patterns.

Agadir is sited on a gentle bay with a seven miles of magnificent sandy beaches. It is the country’s leading fishing harbour and a lively ancient town founded by the Roman and watched over by its citadel, built by the Portuguese in 1540. But in 1960, shortly after the independence of the country, disaster struck and the city was virtually destroyed by two earthquakes and a tidal wave. In the aftermath of the disaster, the government undertook the reconstruction of Agadir and planed the area as Morocco’s major tourist resort. The city was rebuilt according to modern specifications for this purpose and today, Agadir is indeed Morocco’s foremost seaside resort and offers a wide range of five and four star hotels.

Climate Mediterranean climate with Atlantic influence, with mild winters and hot summers. Because the coast is sheltered by Cap Ghir and surrounding hills, sunshine is virtually guaranteed in the Agadir region, with over 300 days of sunshine per year! The winter air temperature seldom drops below 22C during the day, and the water temperature averages 18C.

The transportation is done by tourist transport, which means that the vehicle is licensed and insured for tourism, and affords the maximum luxury available, with the goal of the highest international standard of comfort and security.

You can catch a 4-hour bus from Marrakech to Agadir

And more cities that fly direct to Morocco. You can also go to Agadir or Marrakech with connection through London.

Some of the cities that fly to London with Ryan Air are: Biarritz, Basel, Berlin, Frankfurt, Hamburg, Grenoble, Marseille, Oslo, Faro, Santander, Porto, Newquay, Seville, Tenerife and many many more.